Bean there, done that

So as most people know the winds here in Shetland and the rest of Britain have been terrible! but it final let up here this morning so I headed down to the Mainland with my granddad Tommy to do some birding.

When I got off the ferry at Toft, Tommy was waiting and we went to count a large group of Common Gulls which have been round the parks at Toft for several weeks, we managed to count two-hundred and eighteen (218)  birds but instead of them being just Common Gulls there was a few Black-headed ones thrown in too.
Also around Toft was three Fieldfares (my second ones of the year following one at Mid Yell yesterday), three Blackbirds, two-hundred Starlings and seventeen Greylag Geese (but no Beans!).
We then moved off and we started to count up a large flock of Gulls that were sitting at the mouth of a burn.
In total there was a staggering Five-hundred and twenty plus Herrings, Commons and Black-headed Gulls there!
We left and we headed into Brae and we stayed there a while, we were about to head off when Tommy shouted "Chaffinch!" and I saw three birds fly into a garden nearby, I chased after them and I spotted a beautiful male Chaffinch in a tree with a male and female Brambling and another Chaffinch!
I tried to move into a spot where I could see one of the birds completely but they were all ways behind branches.
The four birds then flew off and I headed back to the car and we left for Lerwick.
On the way we stopped to have a look for three "coal black" Geese with "white on the wings" that my StepDad had seen yesterday but of course they were not there and instead we saw a windsurfer.
On our way we headed to the Bonhoga Gallery via Kergord, we didn't see anything besides Rooks so we went into the Gallery.
The exhibit on was "Dennis Coutts: sixties revisited", all of the pictures were amazing, clear and they were just great.
So after half an hour at Bonhoga we went off to Lerwick and on the way we saw four Mute Swans in Weisdale Voe, one on the Loch of Stromfith and two in Whiteness Voe. 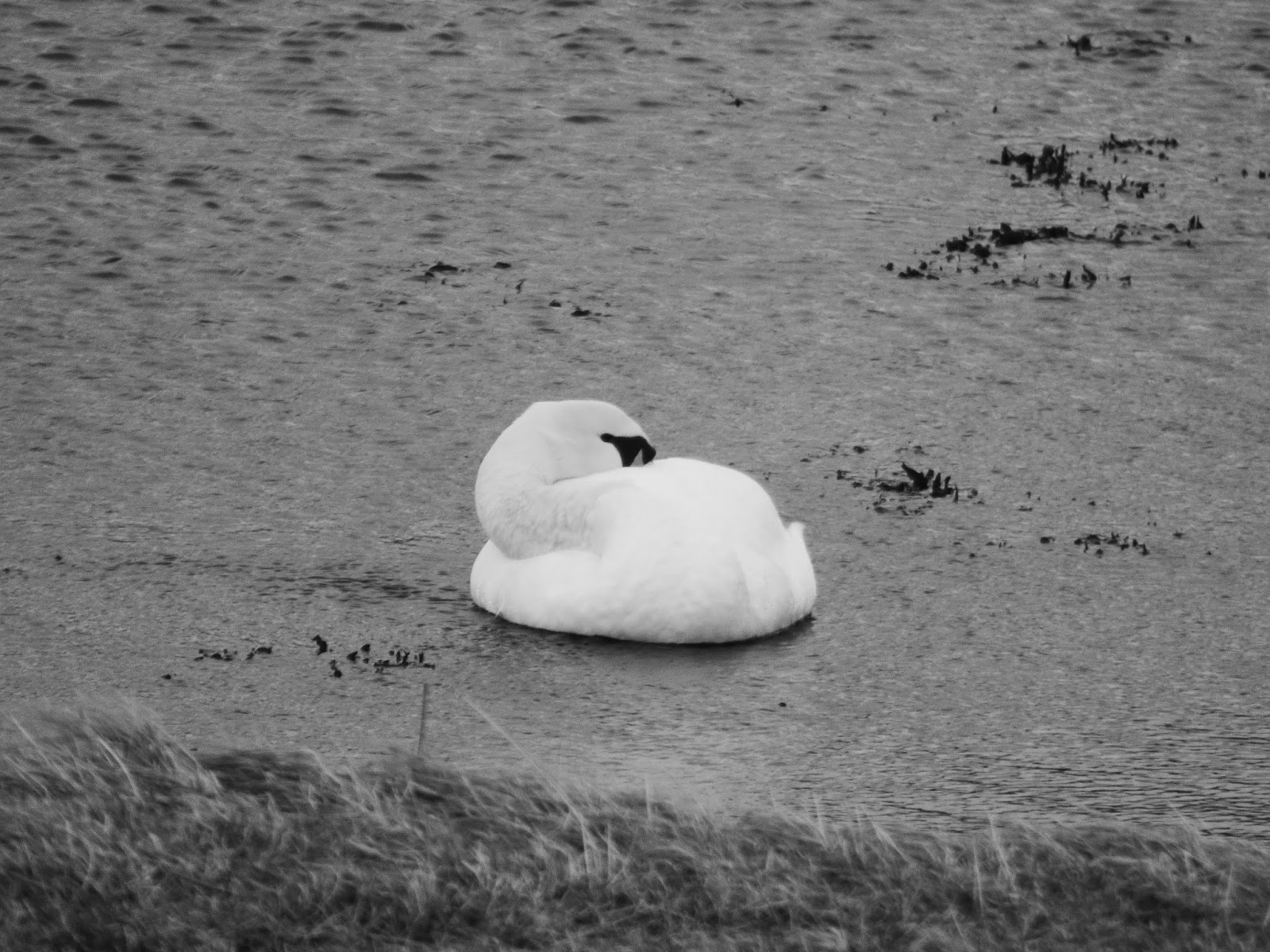 This is a black and white shot of the bird on the Loch of Stromfith.

The next stop on our way to Lerwick was the Strand Loch, when we got round the corner to the loch there was five swans feeding! we quickly stopped and we had a look at each one to see if they were all Mutes and they were!
I got out of the car and took some photos of a few of the Mute Swans but they didn't come out very well.
When I got back to the car, Tommy spotted a large flock of birds in the sky, I had a look with my binoculars and they turned out to be Lapwings! 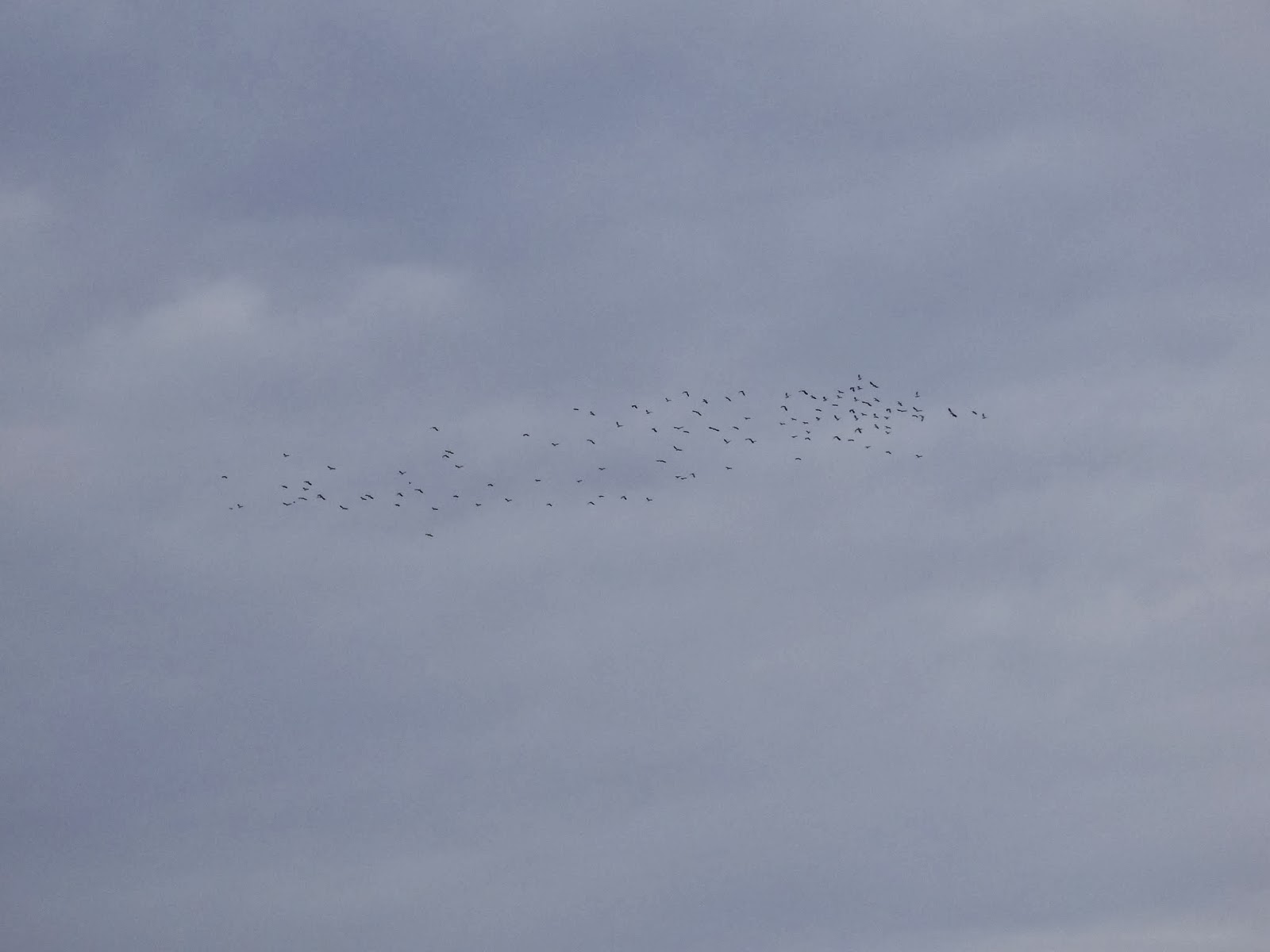 There was about one-hundred and eleven Lapwings in total

We moved further along the road and we decided to have a look at five geese that I had spotted a few minutes before, as we got close to the geese I started to notice that these geese looked a bit different, we got slightly closer and immediately we noticed that they were Bean Geese!
I could not believe my eyes, my first Bean Geese and I had spotted them a few minutes before!! my first self-found rarity!!!
(Note: Unfortunately I found out a few hours later that the five Bean Geese had actually been found yesterday).
I got out with my camera and I started taking pictures of the five Bean Geese while Tommy had a look at them through the binoculars. 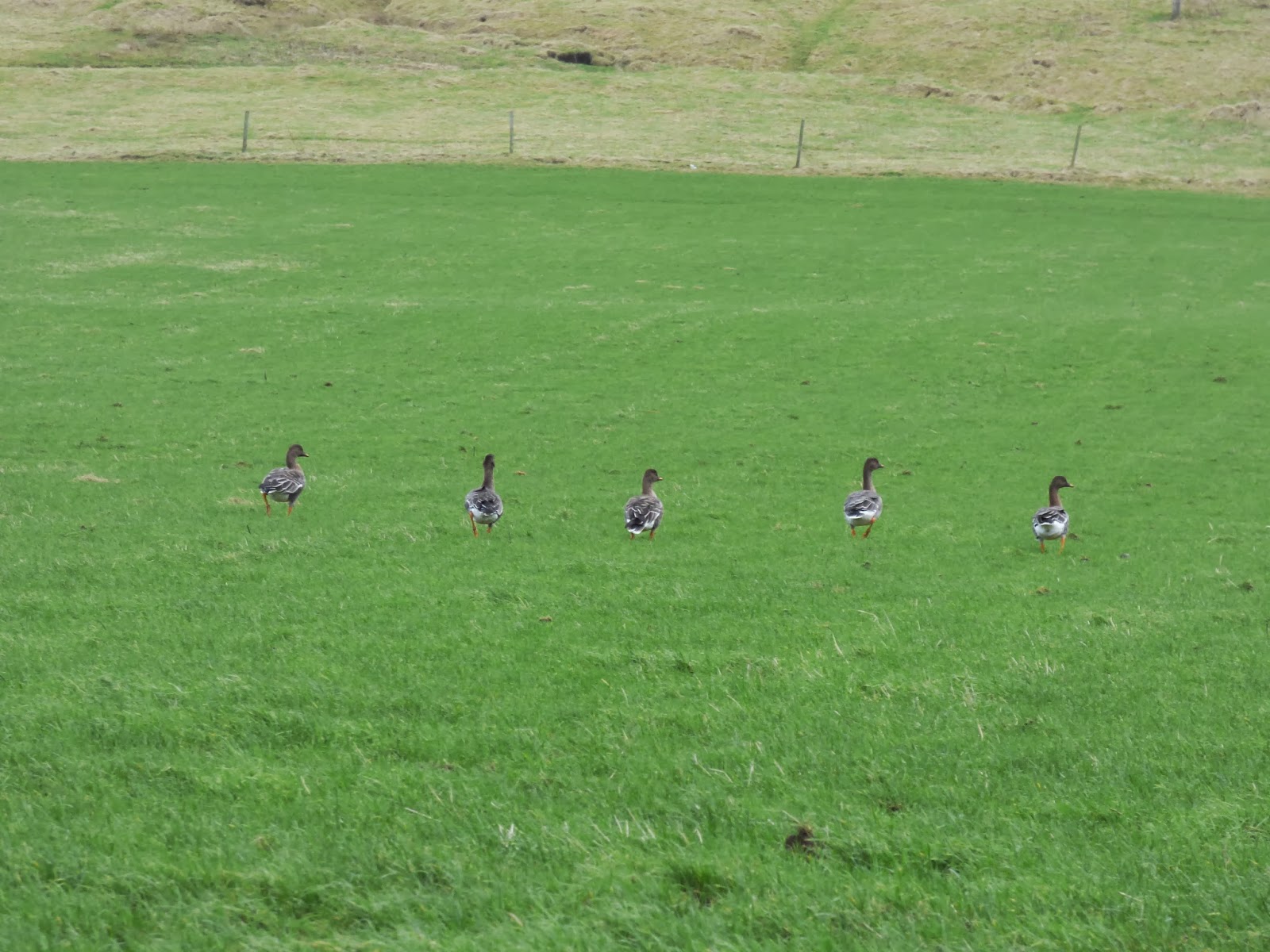 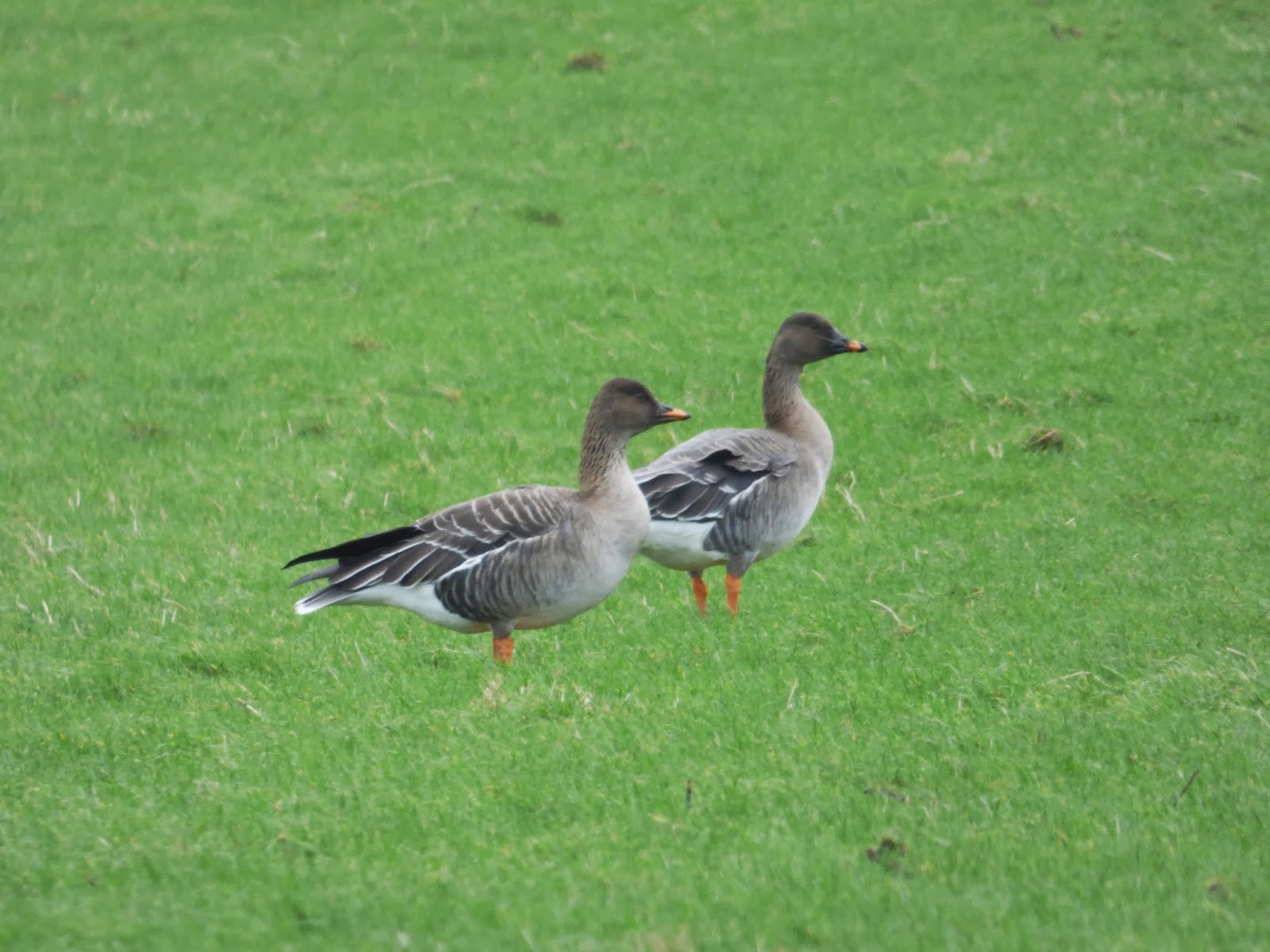 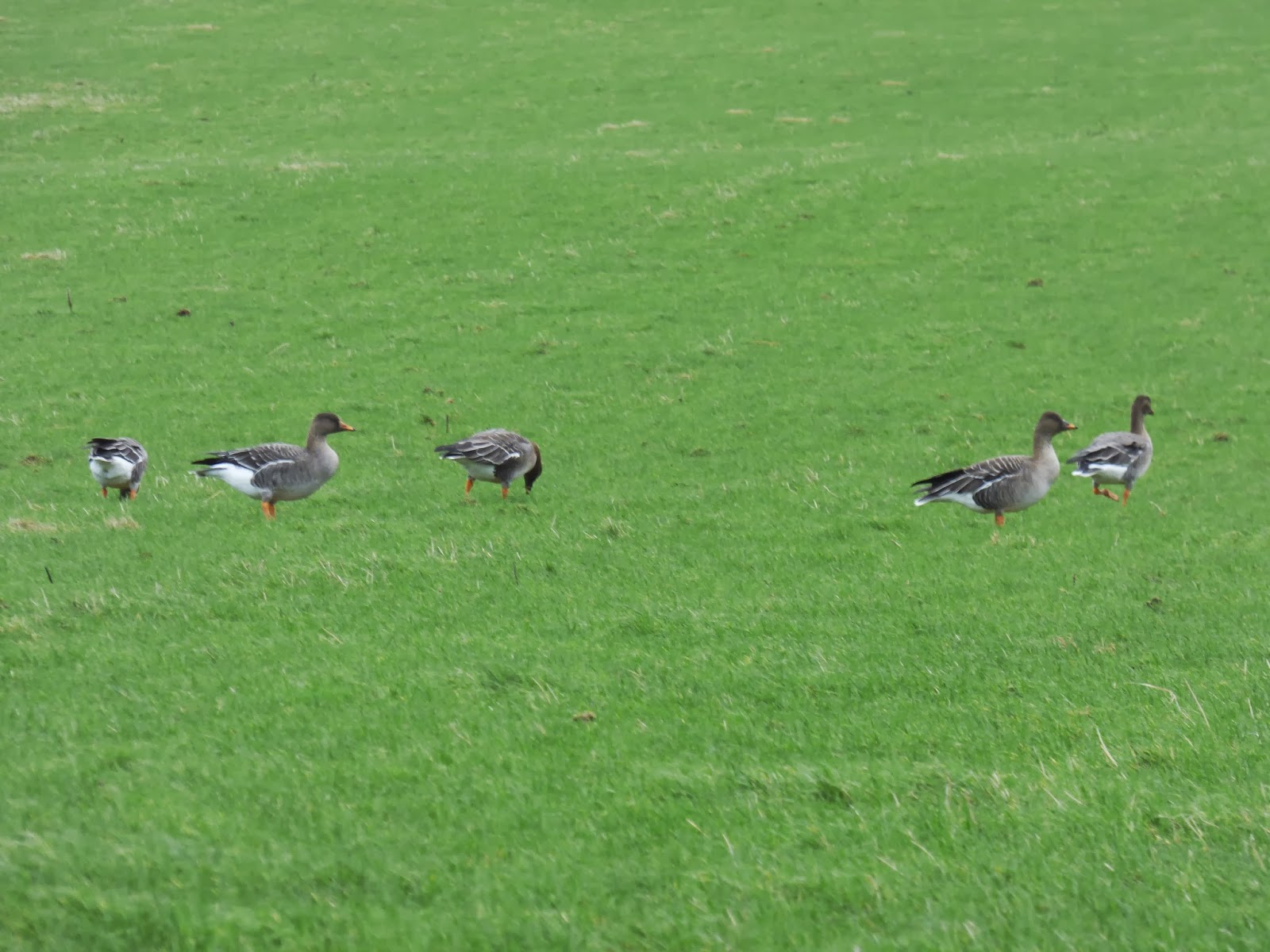 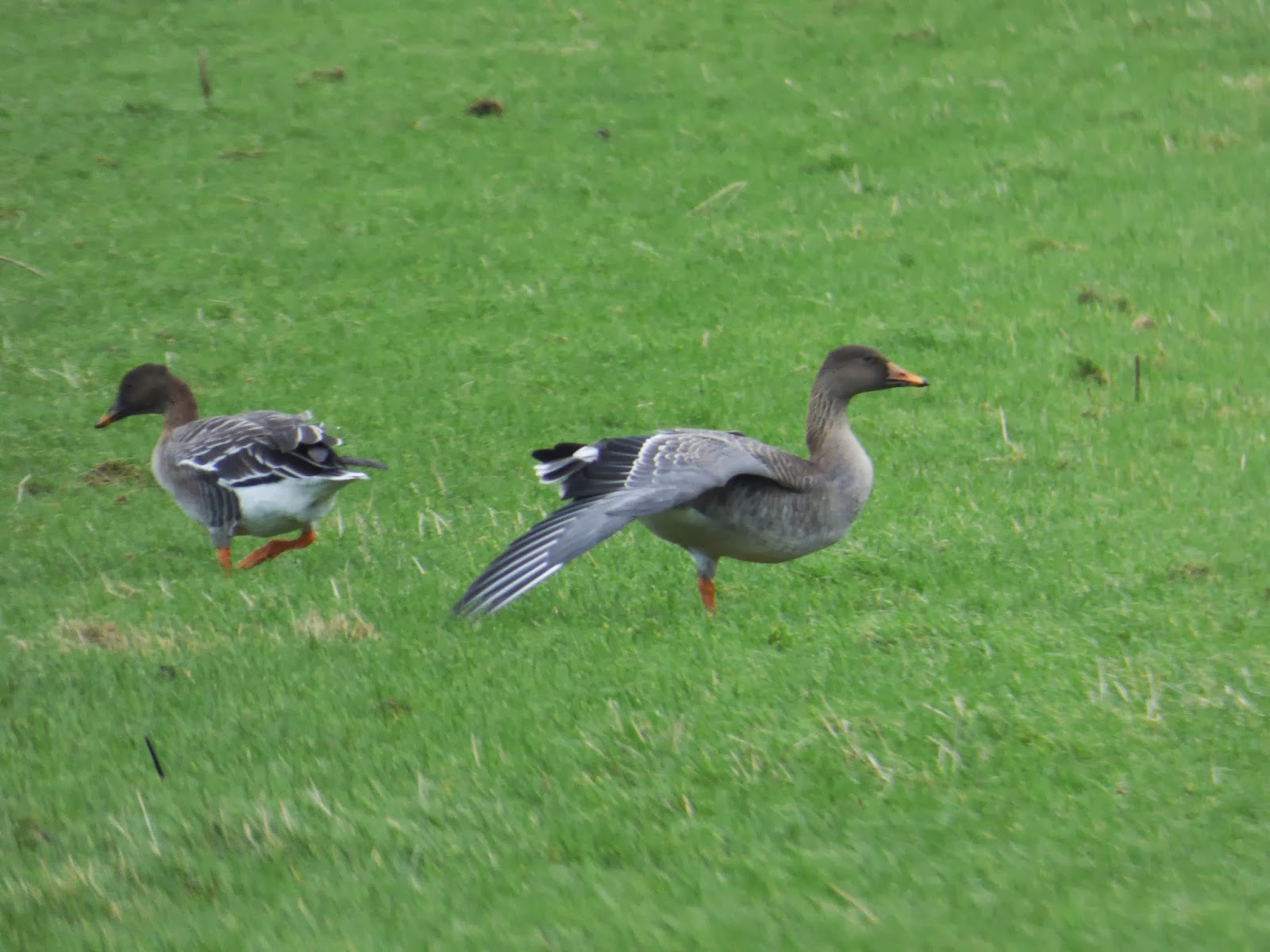 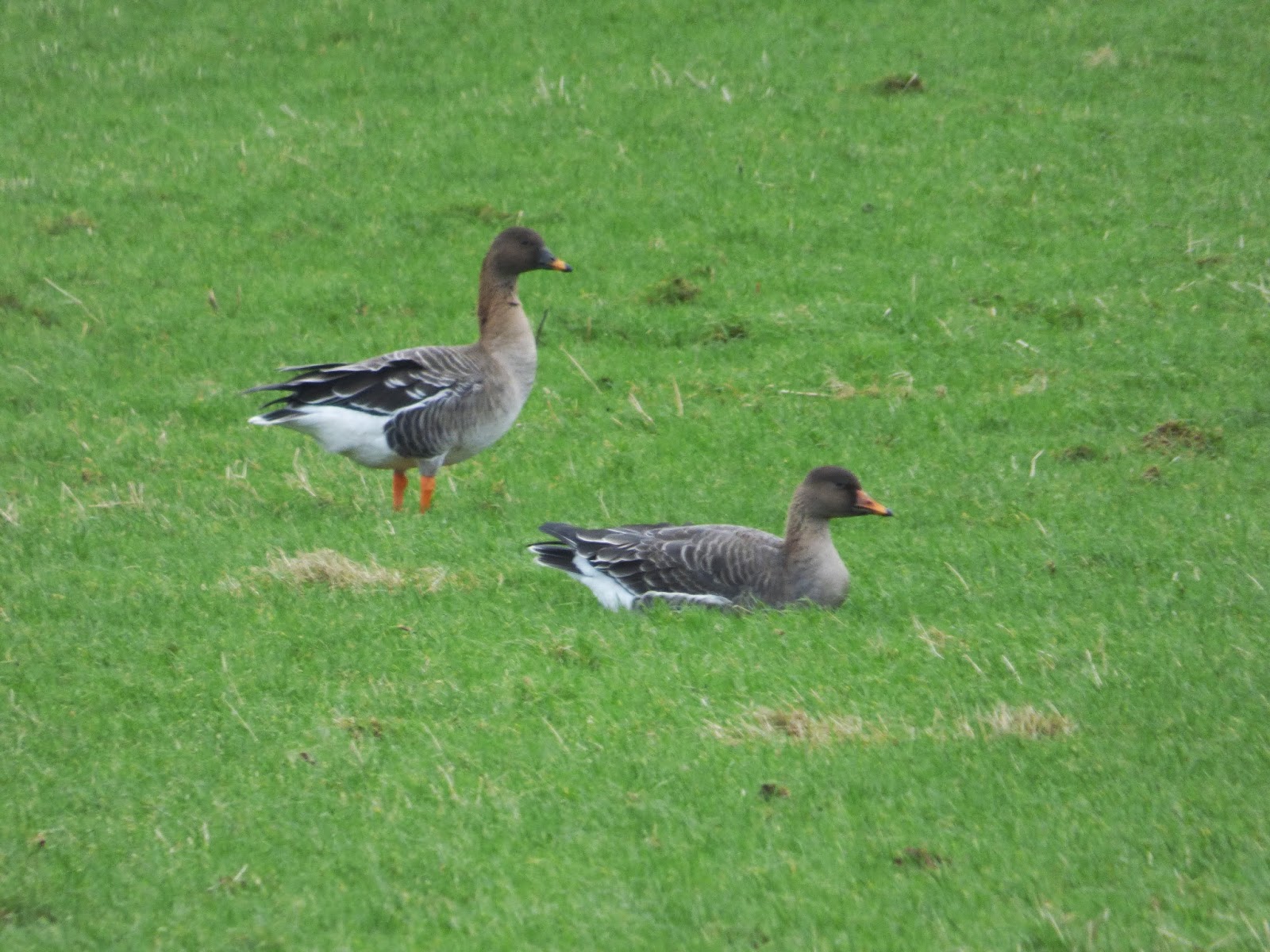 Tundra and other Bean Goose

(later on I put the photo of the strange Bean Goose online and it was said that is was another Tundra Bean Goose, so my flock of four Tundras turned to five)

I phoned Paul Harvey after we had found the Bean Geese to make sure none had been seen in the area and not a single one had been found anywhere nearby!!!

So the Bean Geese eventually wandered to the far end of the park and we left to find some more birds.

Our next stop was the Loch of Tingwall, we were hoping that we might see some Mute Swans but instead we saw two Whooper Swans and three Goldeneyes, for some reason I rarely see the Goldeneyes out of the water. 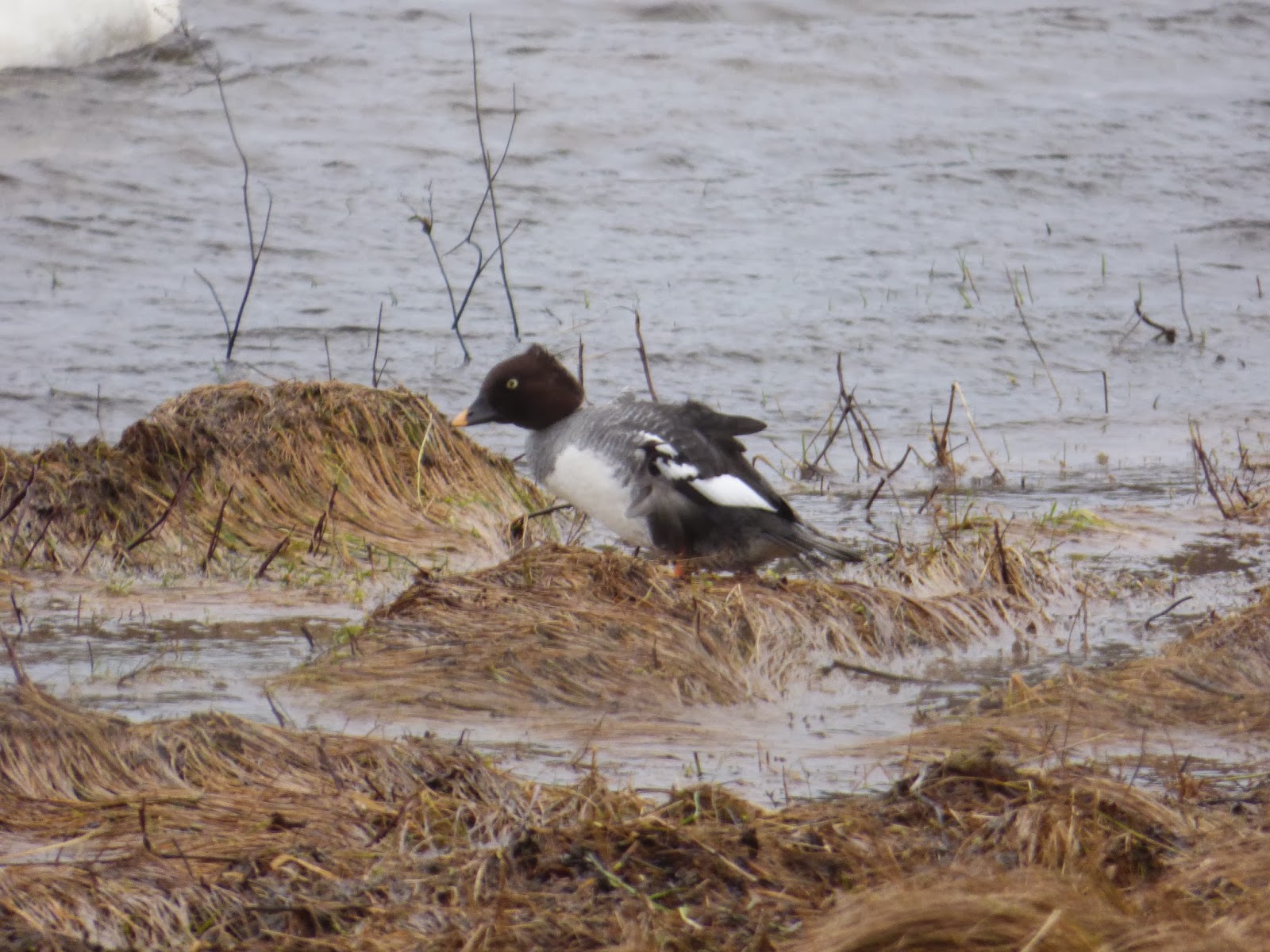 This is only the second time I've seen a Goldeneye out of water.

So we got into Lerwick and we had some denner and then we went to the Clickimin Loch for a look.
On arrival at the loch we saw five swans, we identified four of them as Whoopers and the last one was another Mute!
We decided that Seafield would be a good place to check and we were right because when we got there I spotted two female Common Scoters!! first of the year! 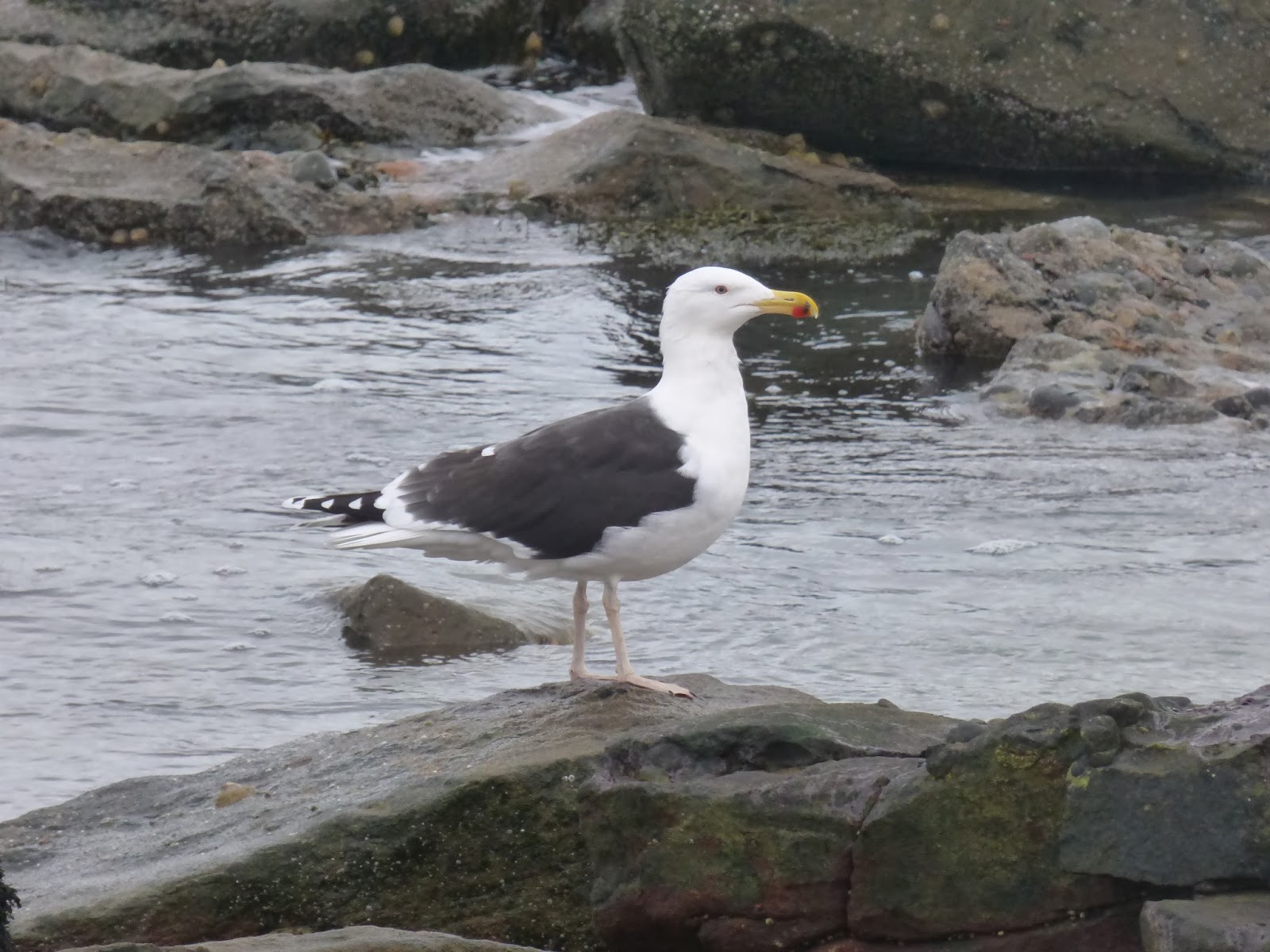 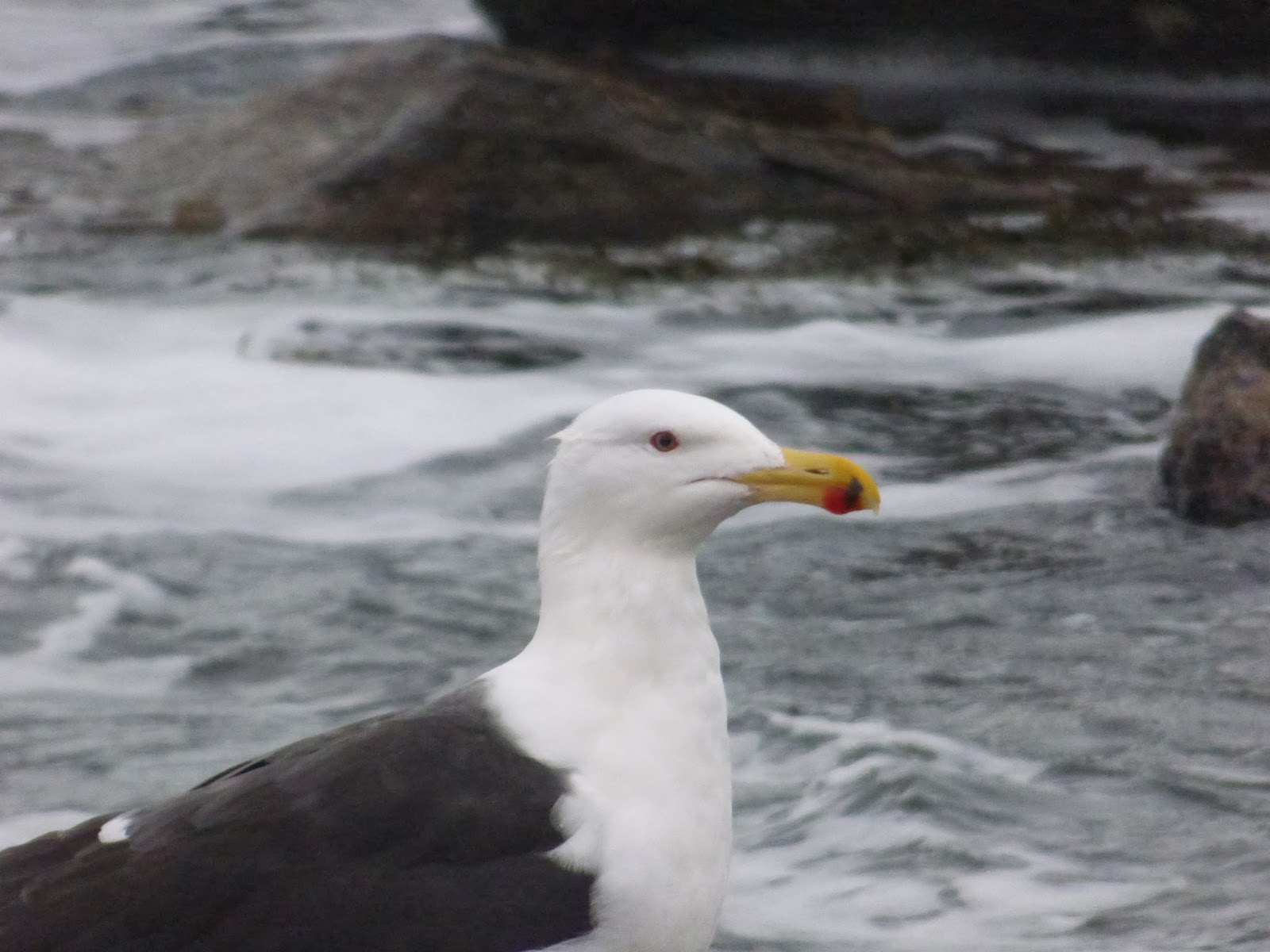 I was even able to get this closer shot 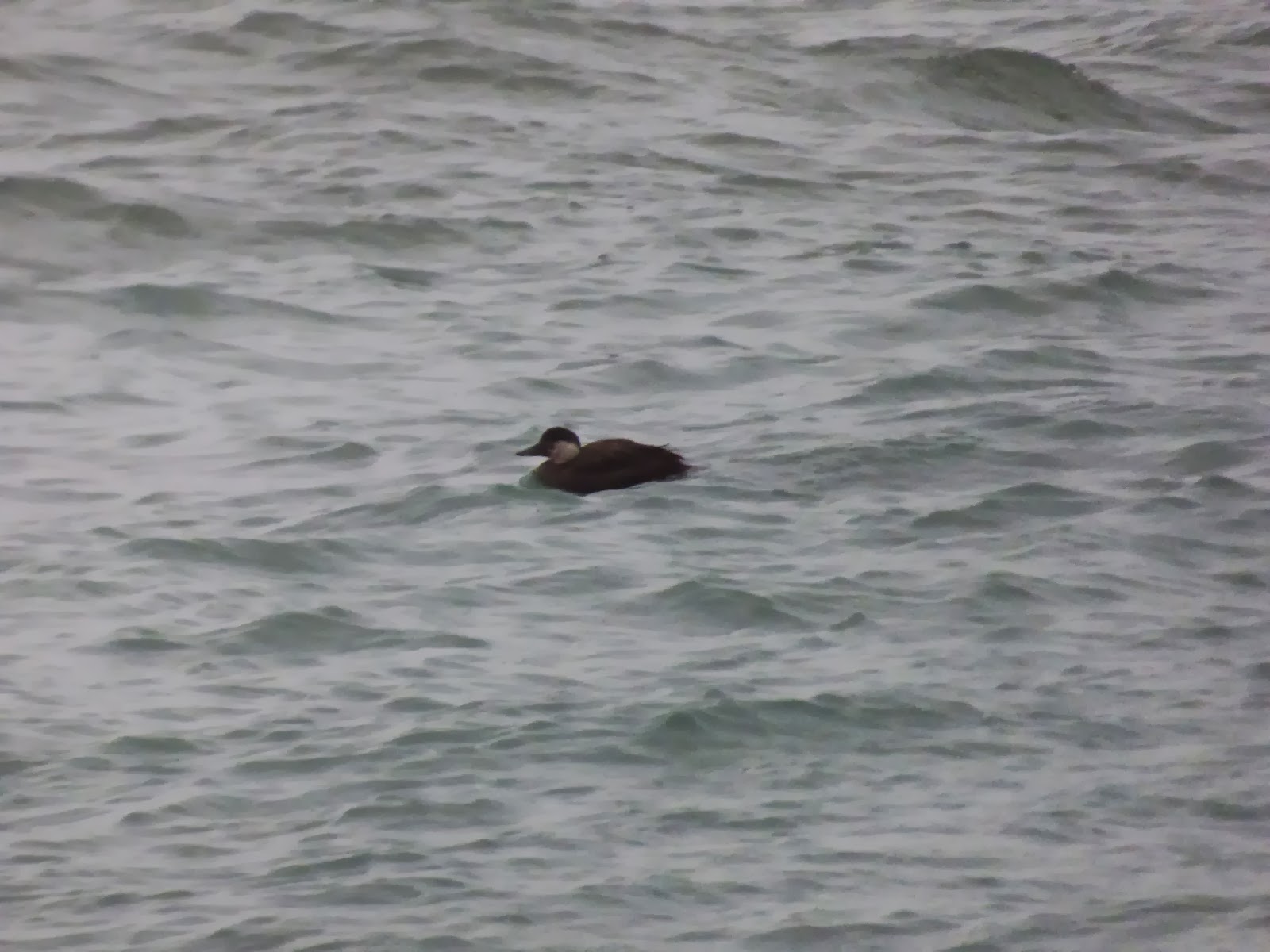 This is one of the closer ones

While I was taking photos of the Scoter, Tommy got my attention and I looked to my left to see a Wren three metres away, I was taking a video of the Scoter and so I missed my chance to get a photo of the Wren but there's all ways next time!

After the Wren flew off, I spotted three Whooper Swans flying overhead! I got out my camera and I got some great photos of them in flight.
Later on I noticed that the goose on the right side had a yellow colour ring on its right leg, I spotted this individual a few weeks ago but I haven't been able to find out where it came from. 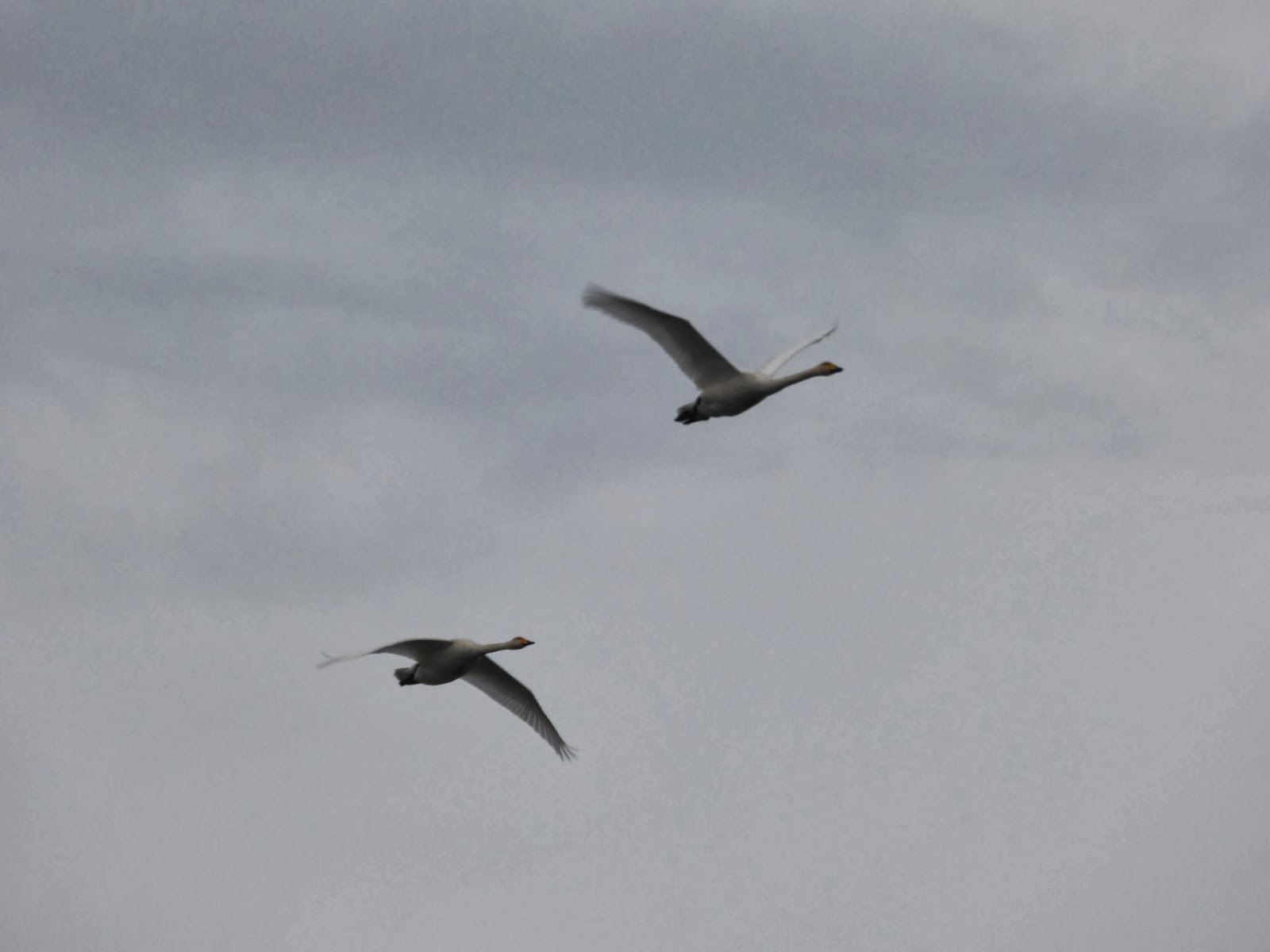 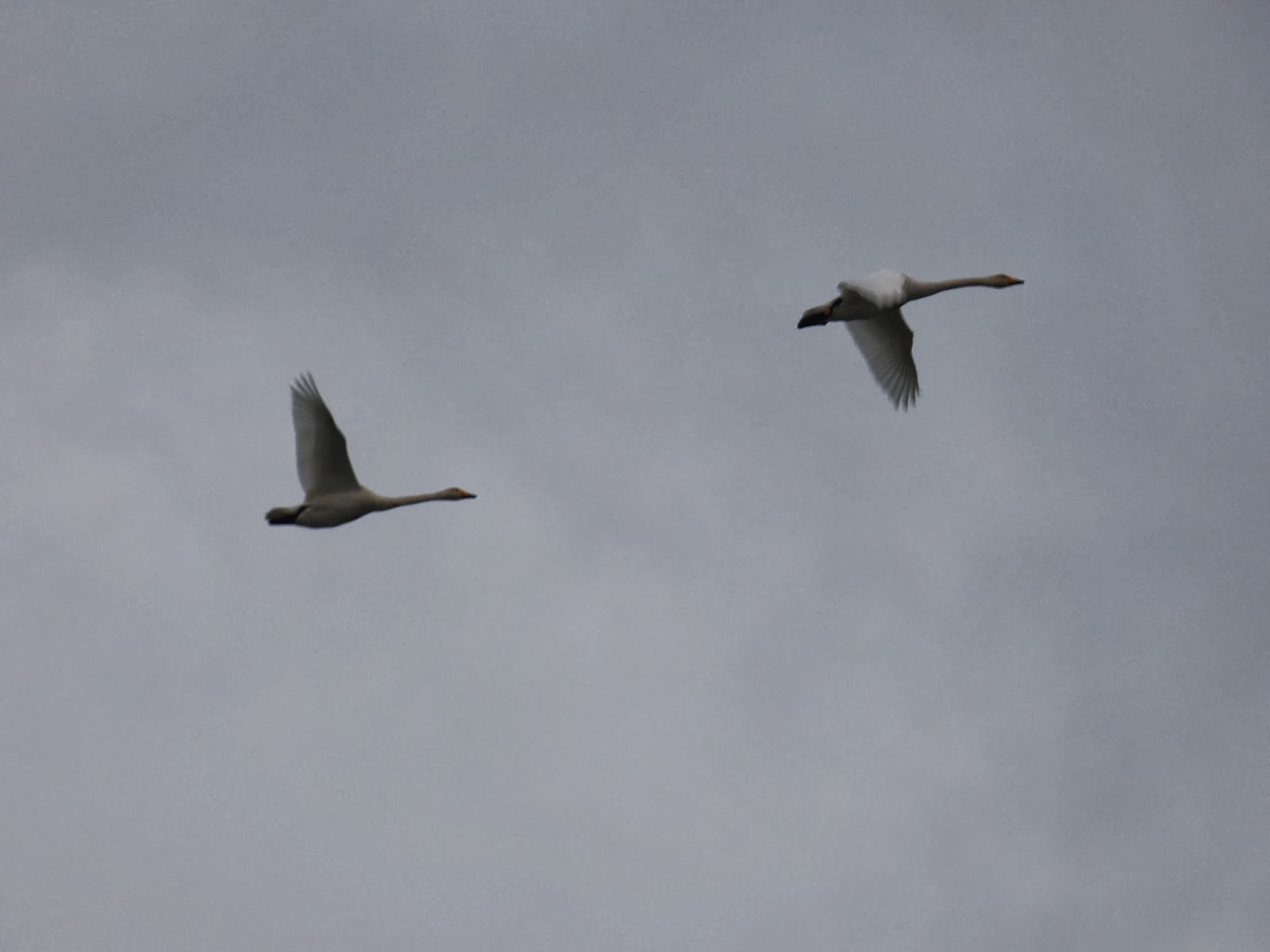 And off they go

We headed further along the road at Seafield and after checking Pullar's Loch at the end of the road, we turned back and I spotted three female or immature Common Scoters way out in Breiwick. 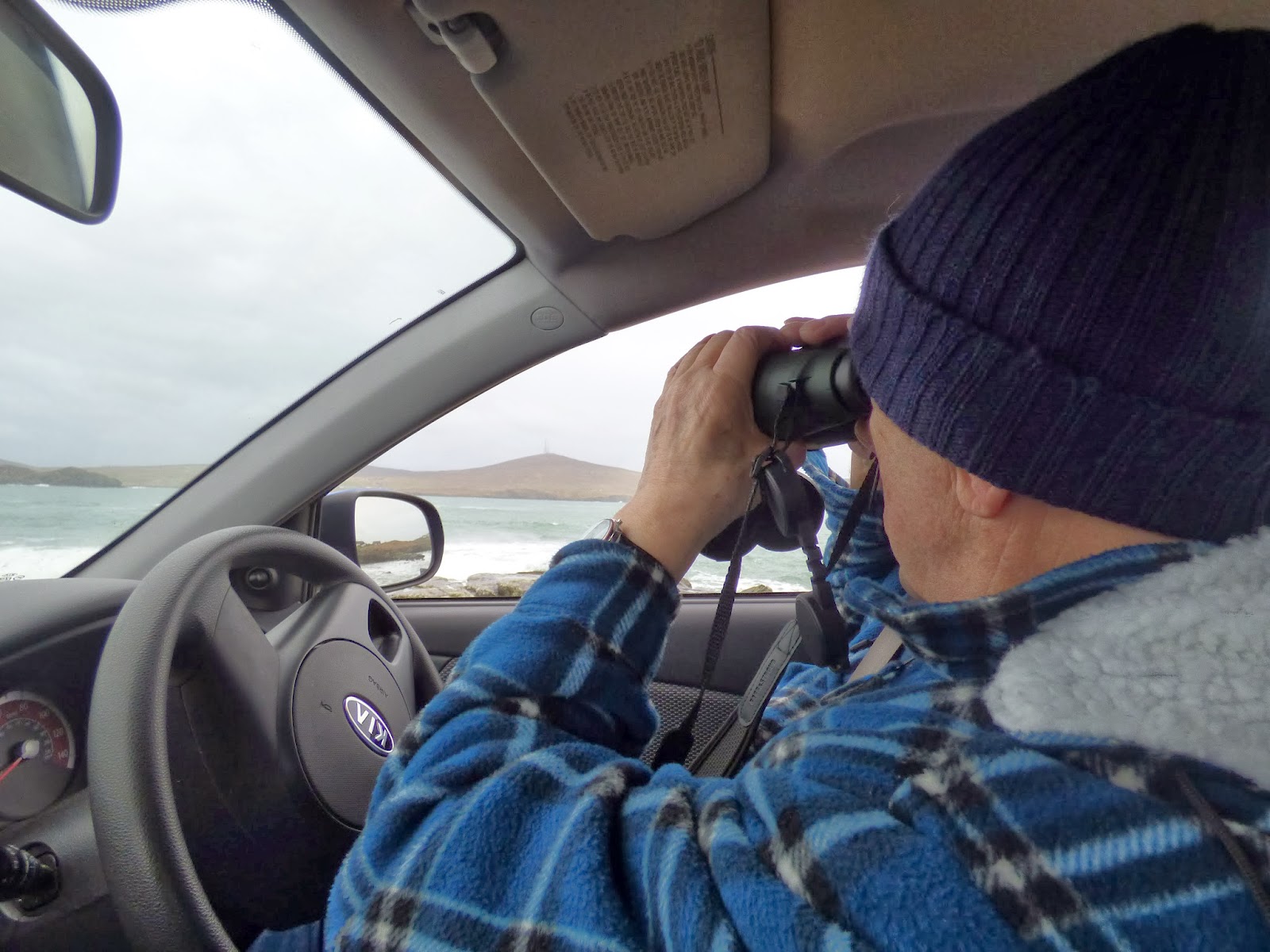 "On the look out for Scoters"

We started to head off when we saw this young Herring Gull sitting on a low wall, so I decided to get out and get some photos since it was so close. 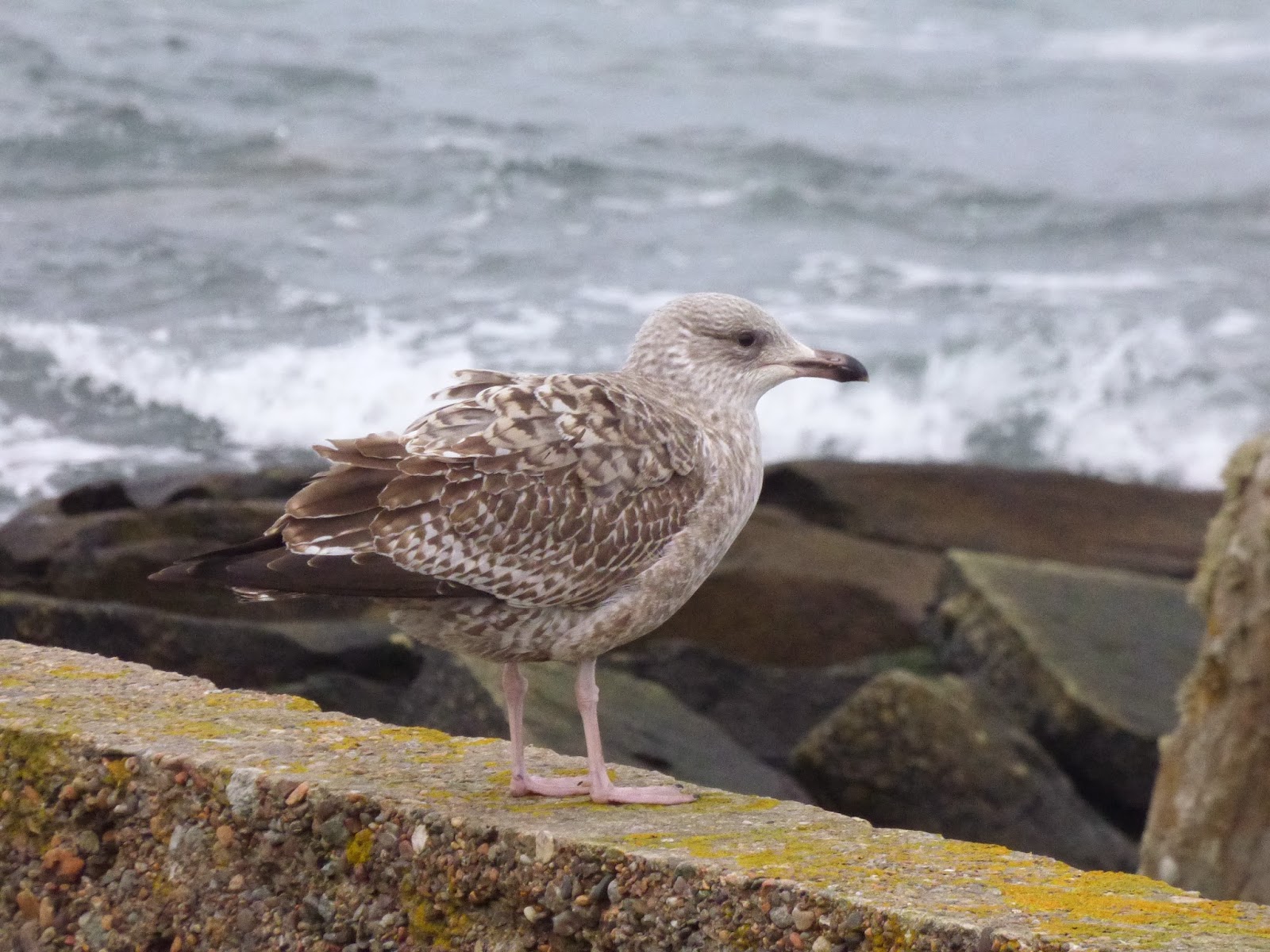 I was really surprised that it didn't fly off 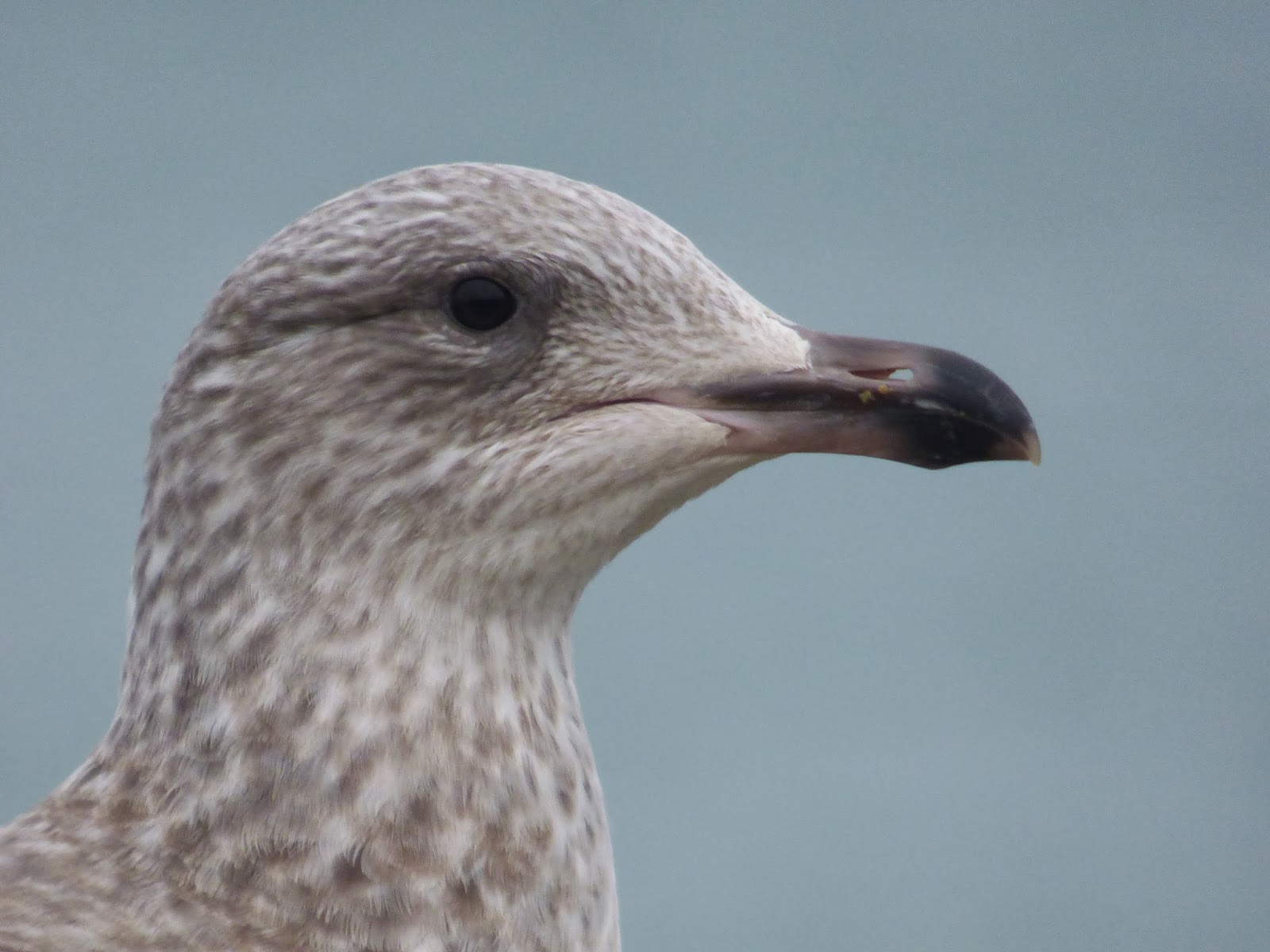 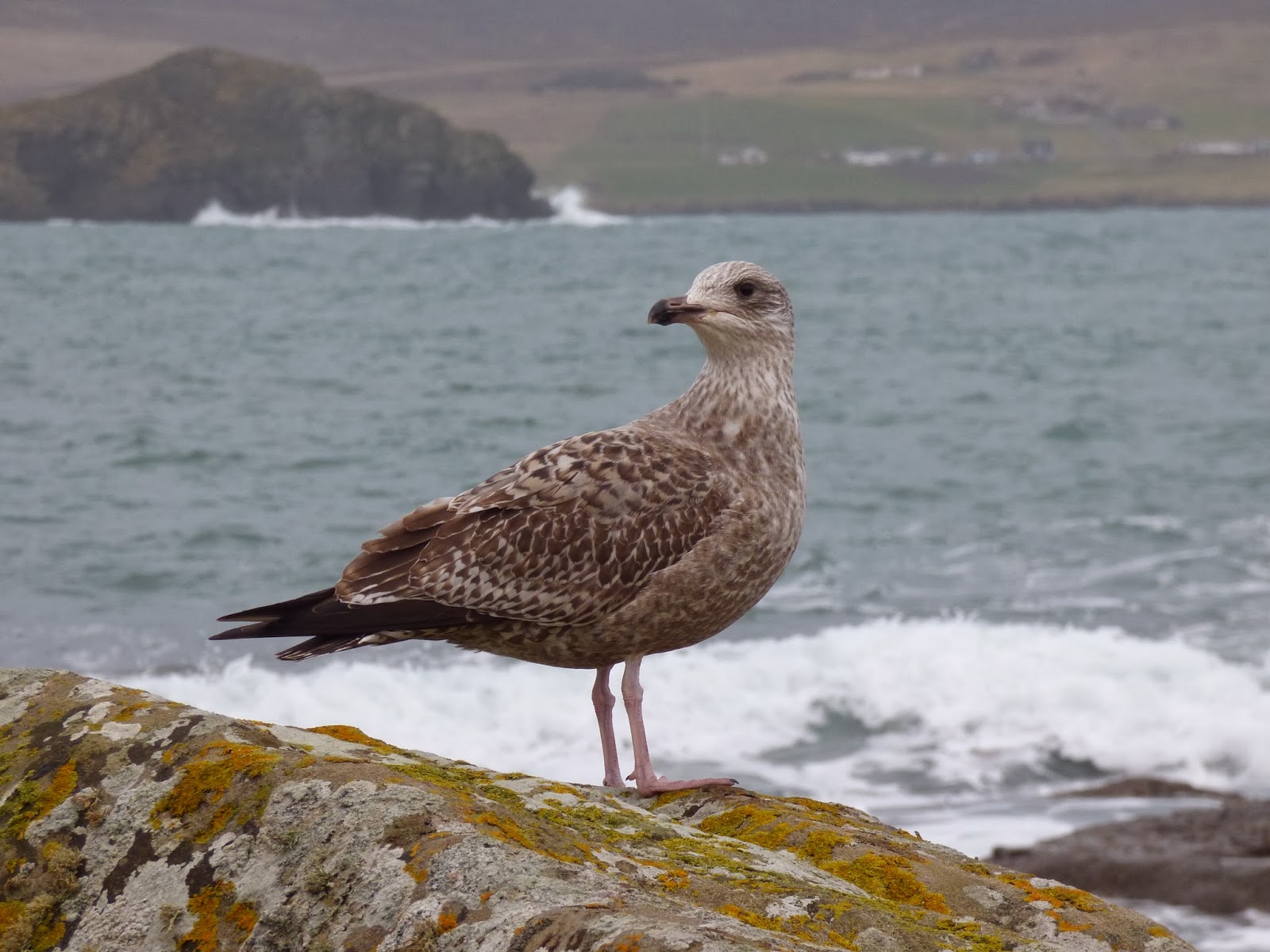 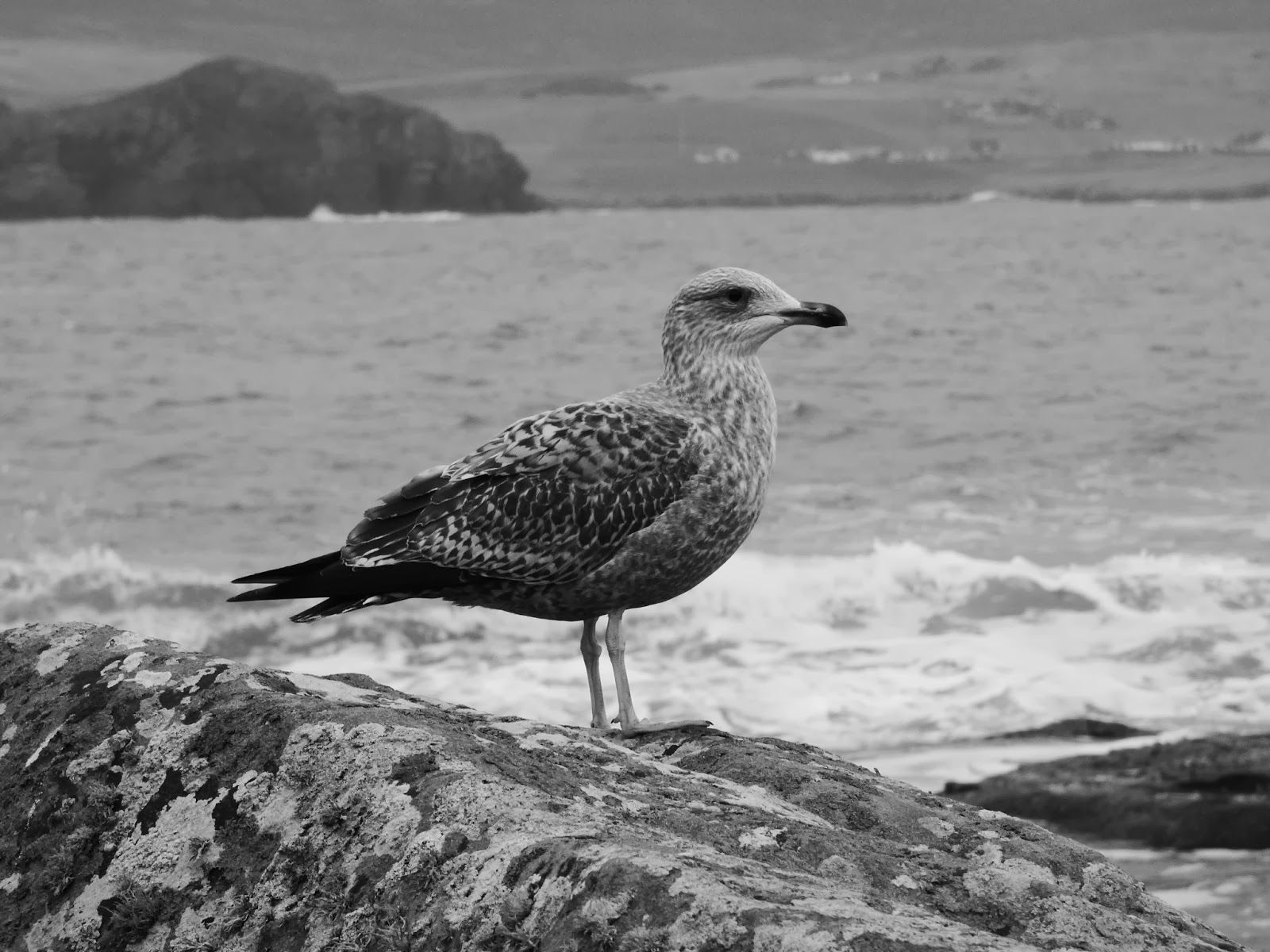 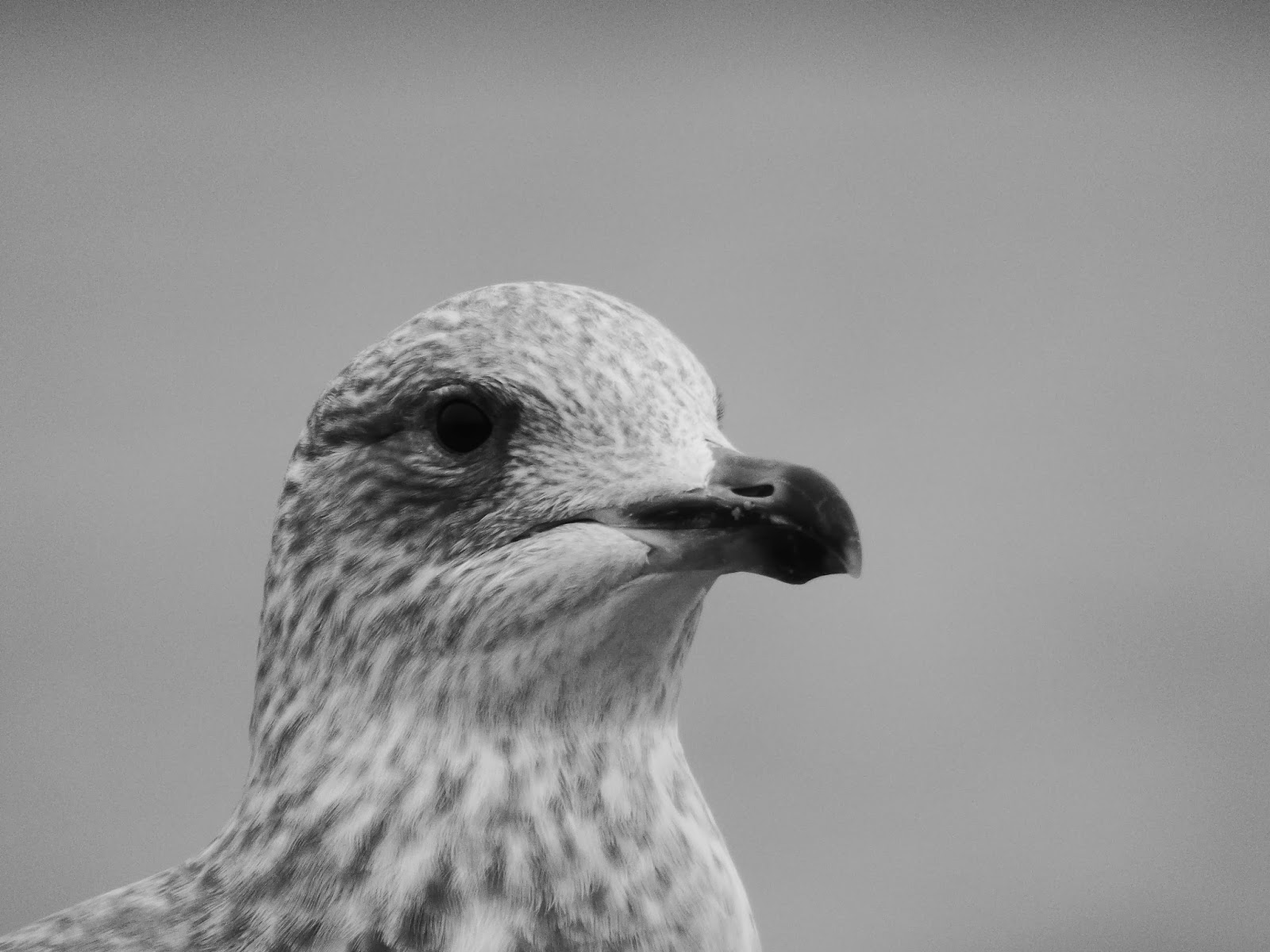 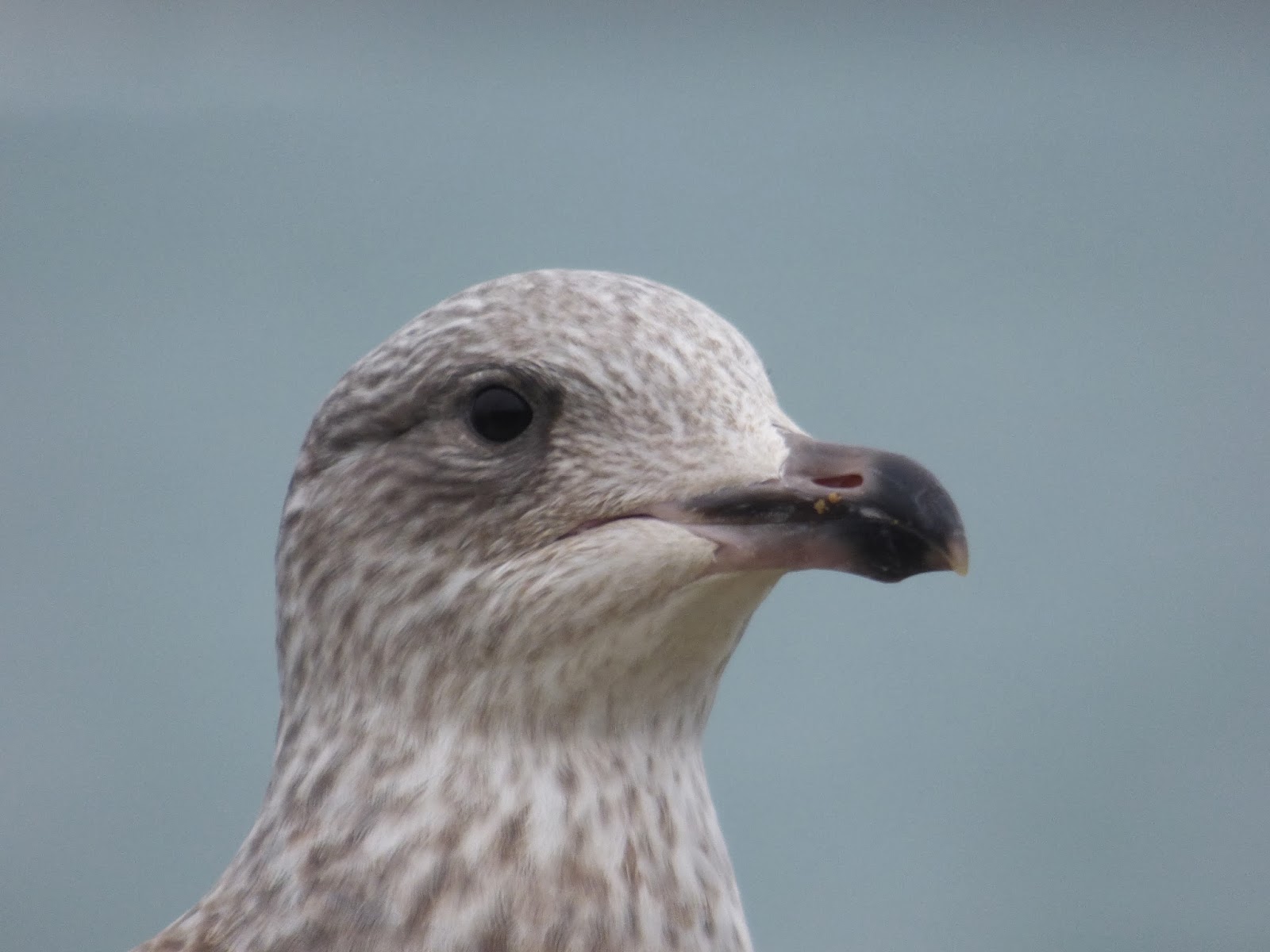 My final photo of the posing Herring Gull

So Tommy stuck me to Dads and soon afterwards we headed out to Girlsta, while out we saw a Snipe, a Red Grouse and my final two Mute Swans of the day which brought my Mute Swan total up to 13 birds.

And finally we went home and this was the end of our day!
Posted by Logan Johnson