Its now officially that time when the migrants are coming, birds have arrived and in Shetland we noticed the first real migrants arriving at the start of the week.


I'd been in Aberdeen during the bank holiday and had come back to find that a few birds were creeping in.
Dave was interested in going out so we headed down 'Da Ness' on Tuesday the 29th to find any early returners in the South Mainland.


First migrant I had of the day was a female Pied Wagtail at Seafield just before Dave picked me up, taking my year list up to 95.
Dave soon came and we headed down with our first stop being at Clumlie and Boddam, both though appeared pretty quiet and I was wondering if we were going to see any birds.
Virkie didn't have an early Sandwich Tern but 3 Bar-tailed Godwits or Barwits and a Knot were present on the tideline.
Next we tried to pick out the Black-throated Diver that had been wintering in Quendale Bay by scoping it from the western end of the Sumburgh Airstrip (Scord), I wasn't that hopeful as it could literally be anywhere in the Bay and it might be too far away to ID.
We spent around 10 minutes scanning for it and then I picked up this diver which looked slightly odd, not like your usual GND, I got Dave onto it and he scoped it out, it took a bit of time to ID due to the difficulty of the waves and it had a tendency to never look at us but Dave eventually decided that it was the Black-throated after he pointed out some of the features that separated it from GND.
Now that was another year tick, number 96 and only my second ever sighting with much better views!
The Loch of Gards at Scatness was next but there wasn't any American Wigeon in the duck flocks but instead to make up for that there was a very out of place Barwit on the loch's edge.


Grutness was next for the Gadwall which was still in the exact same spot as it was on Saturday and then it was up to the quarries to try and get Saturdays' Chiffchaff, driving along we both noticed this thing on a dyke and it took a minute for our brains to figure out what we were both seeing, before we both blurted out 'Wheatear!' and it dived over the wall. First one back in Shetland and year tick number 97!
Its the first time I've ever seen a Wheatear in March and its a pretty early one as well.
Finally we got to the quarry and it was a mess, it isn't a big quarry but a lot of sheep had been shut in there and it had completely messed up the ground.
Though in fairness there wasn't really anything in there anyways, a Robin was it and then the Head produced nothing in its bushes until two Woodpigeon started circling overhead, presumably migrants thinking of leaving Shetland?
It was time to head to Hillwell but for some odd reason I wanted to look at the dyke that went from the road to the farm, it was a good idea because we found the Chiffchaff feeding in the March sun, number 98, now I'm pushing close to 100.
Hillwell and Quendale had very little stuff to find after 45 minutes of searching and the only birds of note were the lingering Pink-footed Goose and Coot, quite poor for Hillwell.


Spiggie though had the lingering Brent Goose and the Little Grebe from Saturday was changing into summer plumage and we finally ended on Geosetter (the first time I've visited there since autumn last year) where two Goldcrests and a possible Water Rail were in the trees.


That concluded our day, taking me the step closer to 100 species but who knows, will I be able to get 100 before month's end?

A day in Unst; the first migrants

On the 12th of March I got up early and left Lerwick on the 0740 bus to head to Unst for a bit of birding with Robbie Brookes, arriving in Unst at 0945 we headed to Easting to try and spot the wintering male Surf Scoter that had been found on Unst last year.


First though we stopped in Uyeasound, getting my first 2 Red-throated Divers of the year on Easter Loch, I was pretty glad to have finally seen them as I've spent the last month hunting for them!!
On to Easting, we grabbed bins, cameras and scopes and headed out the car to go look for the Scoter down by the shore, on the way down Rob told me that the bird liked to sit in the middle of the bay before he raised his bins and pointed it out, right in the middle! I got my bins up and saw it in among 3 Shag, year tick!


With our brief sighting we walked further down towards an old ruin by the sea where we decided to get better views with Rob's scope.
It took a few minutes to get the scope set up but we were soon enjoying good views of the bird diving with the group of Shags (Scarfs). 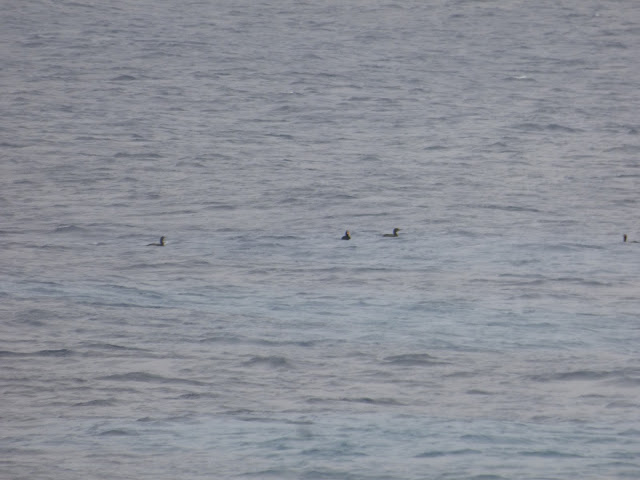 Soon we decided it was time to go and headed off to go find other birds, a quick stop in Uyeasound produced 5 Goosander on two different lochs, a pretty good count.
Next came Baltasound which was quiet apart from a single European White-fronted goose in among some Greylags.
Haroldswick was better with two European White-fronted Geese and a Comorant so we headed north to Skaw.
Skaw was dead really, but the walk was good, Lamba Ness then showed obvious signs of migration with at least 15 Skylarks around the roads that weren't there the day before and I then managed to self-find my first Lesser Black-backed Gull of the year flying over the road!! number 90 for the year, two birds from beating my previous March best, seems like I'm on a roll this year.

Now we headed back south to Norwick, another Lesser Black-backed Gull was in a Herring Gull flock but besides that it was quiet.
Things defeitnly picked up when we were waved down by a local who told us he'd had an immature Sea Eagle on Saxa Vord for the past two days, and the first time it was only 20 metres away!!! he was serious and he knew what he'd seen, many Shetlanders know a strange bird when they see one, they know whats the norm so when a Sea Eagle is only a few metres from you, you know it.
We thanked him and shot up to Saxa Vord and searched the hills, but to no avail, 2 Snow Buntings were the only birds we could find in the mist.

The bird though was seen the next day, flying over Saxa Vord and some amazing views were had, though I was two hours too late when I twitched it from Mainland.

Back to the present blog, anyways we just drove about hunting for birds and soon it was time for me to go, Rob ran me to the ferry after having me on an excellent day out and I thank him very much for that.
Posted by Logan Johnson 1 comment: