Out Wast and around the Patch

On the 8th I was doing the patch at 0830 before heading out "Wast" to the West Mainland with Dave and Pete Ellis at 1015.

I was at Clickimin in no time and I picked up the Moorhen that Dave had found yesterday before making a bee line for the feeders in Helendale.
It was strangely quiet when I arrived and it was a ten minute wait before I heard the familiar call of the Blue Tits, they descended on the bird feeders like fluffy devils along with a couple of Greats, I tried to get close but they all just disappeared (not their usual habits).
The Crows were flying around as well and I noticed the wintering Sparrowhawk gliding around, chasing the Hoody's, the "peerie" birds don't really like the Sprawk so it seems he was the culprit.
Though after maybe another 10 minutes they started to return and I waited for some attempts for photos.
The birds were still a bit jumpy but I managed some below decent shots and one of which you could class as a first for Shetland! 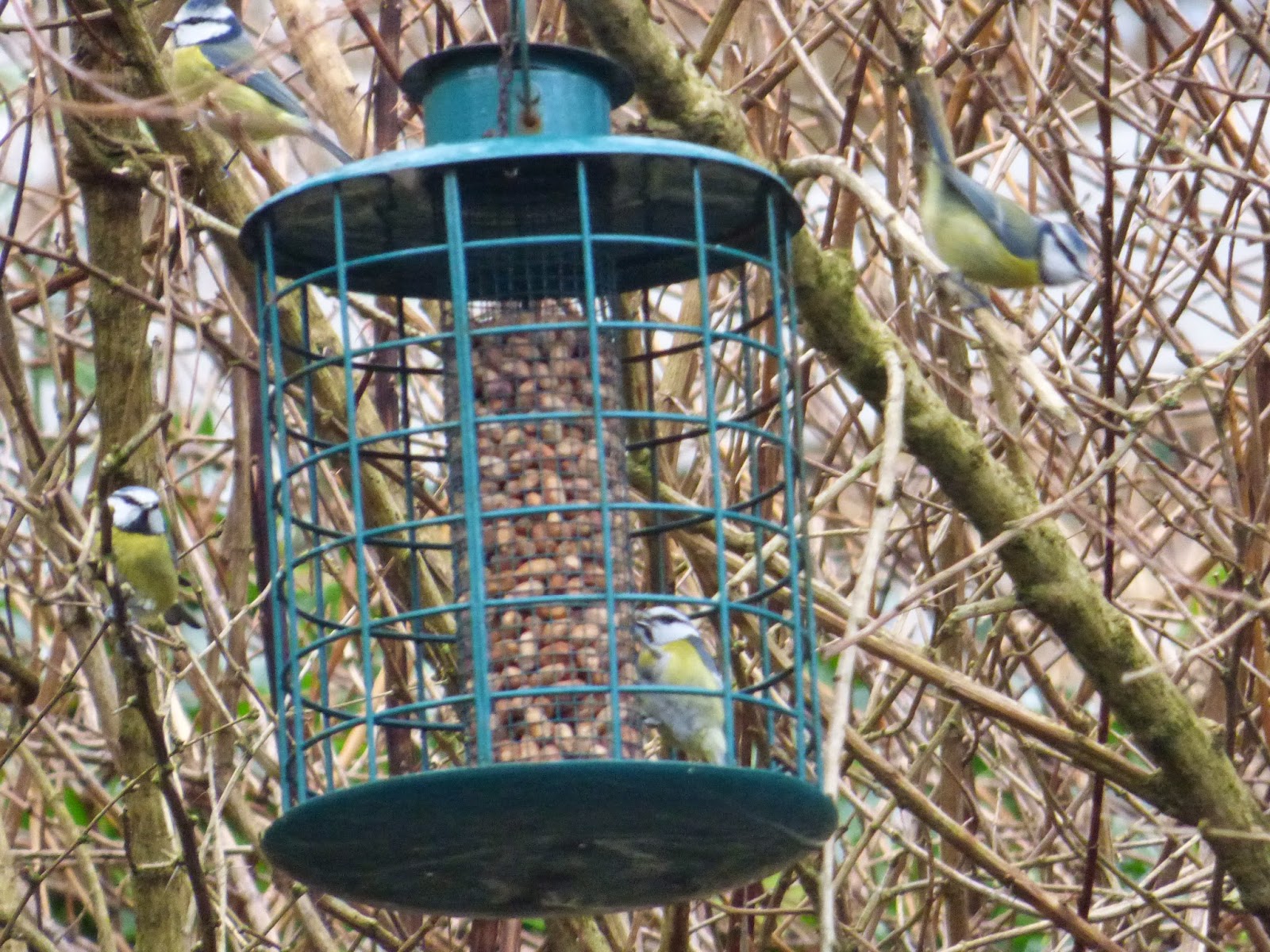 Four Blue Tits on/around a feeder, most likely the first ever shot of four together in Shetland or at least one a a rare few that have been taken!

There was a grand total of 6(!!) Blue Tits together and 3 Greats as well, not bad numbers for the likes of Helendale.
They all left though and I was off as well as I still had a few things to pack before Pete arrived.

By 1015 Pete and I were off to pick up Dave from Trondra, several minutes in and we were off again before soon coming to the Asta & Tingwall Lochs.

There was some Tufted Ducks and Goldeneye on Tingwall but not much besides a Long-tailed Duck and a Slavonian Grebe so we just went West. 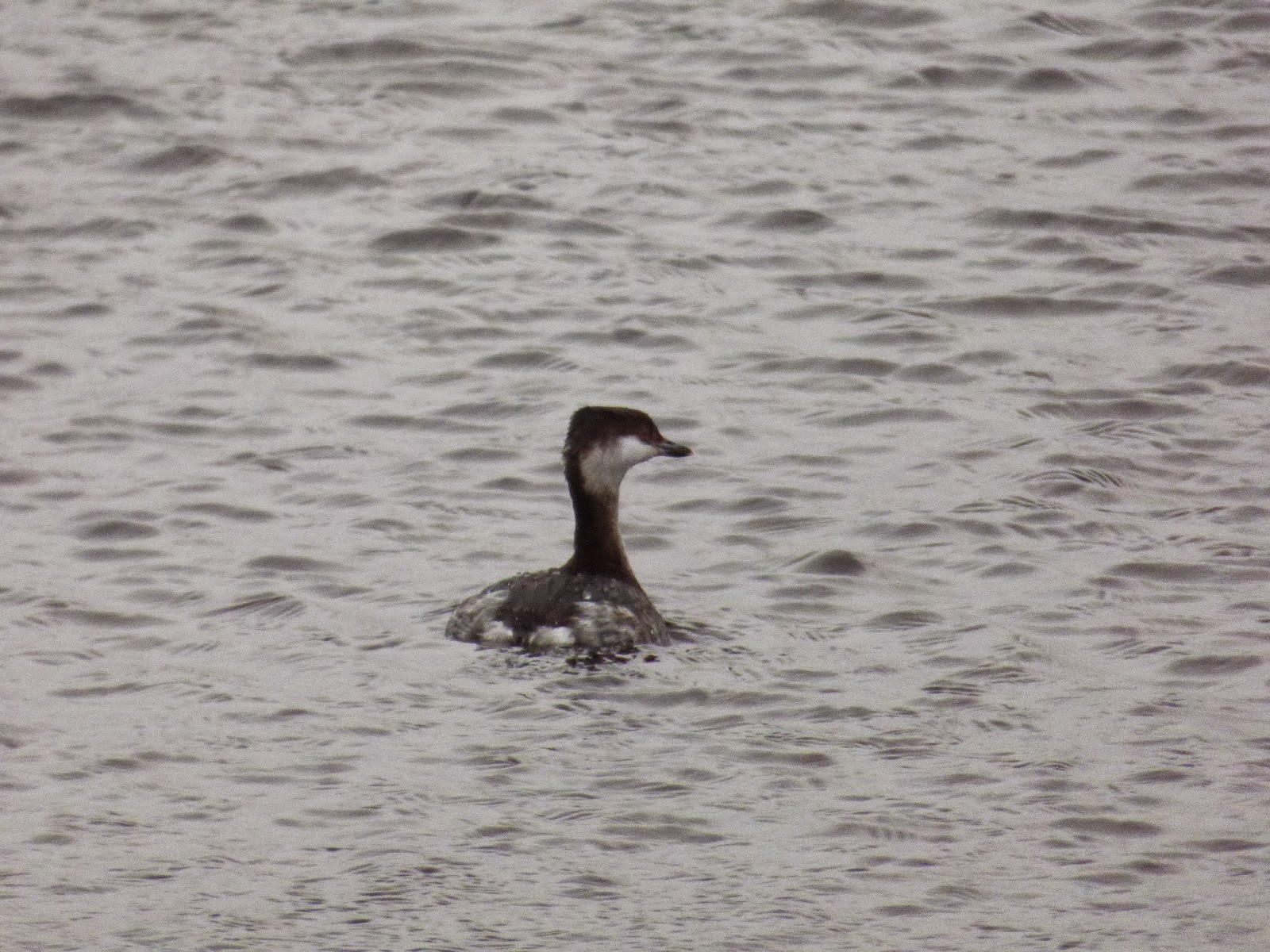 An ok shot, he was pretty close in

A few sites were checked on the way but Teal and Wigeon (in good numbers) were the only birds of note.
We were still a couple of miles out of Sandness when we drove by this Loch, on the northern end of it I noticed this white duck, I almost kept quite but a green head got bells ringing and I told Dave to stop and reverse! it was worth it as we enjoyed some nice views of a male Goosander on the oddly named loch called Loch of Stanevalstoe.

Finally it was time to see this Yank duck, we headed to the Loch of Collaster and started scoping out the Wigeon, I cracked out the Tea & Coffee (I brought a flask) and all we had to do was happen to spot it........ the only problem was that it wasn't in the flock.
The A.Wigeon was no where to be soon, probably on a nearby Loch, the cuppa's were finished, the engine started and the trio was off.
Going through Norby, Pete had this thing go off some wire by the side of the road and I got my eyes on it as it was silhouetted against the sky, it looked "peerier" than a Chaffinch and "Tit" came to mind, my shoutings of "Tit!!" stopped the car and I tried to eye it on the fence behind us but I couldn't see it so Dave reversed.
I didn't see anything but then it flew of a strainer post right at the corner of the road and went over a shed! Dave parked up and myself and Pete went to find it.
For Norby there was a good host of bushes and trees so we tried them but with no luck, after another attempt we both spotted something fly into a bush on the other side of the clearing, I went round while Pete kept watch.
Then this thing flew out of the bush and perched itself in a tree, a Blue Tit! I knew it! it didn't stay long and took off a few second later, how its finding food out here we don't know.
Next we headed for another Loch which was full of waders and ducks, Dave picked out the American Wigeon (year tick) but also on/around the Loch was Turnstones, Teal, Wigeon, 69 Ringed Plovers (!!), Shalders and some Redshank. 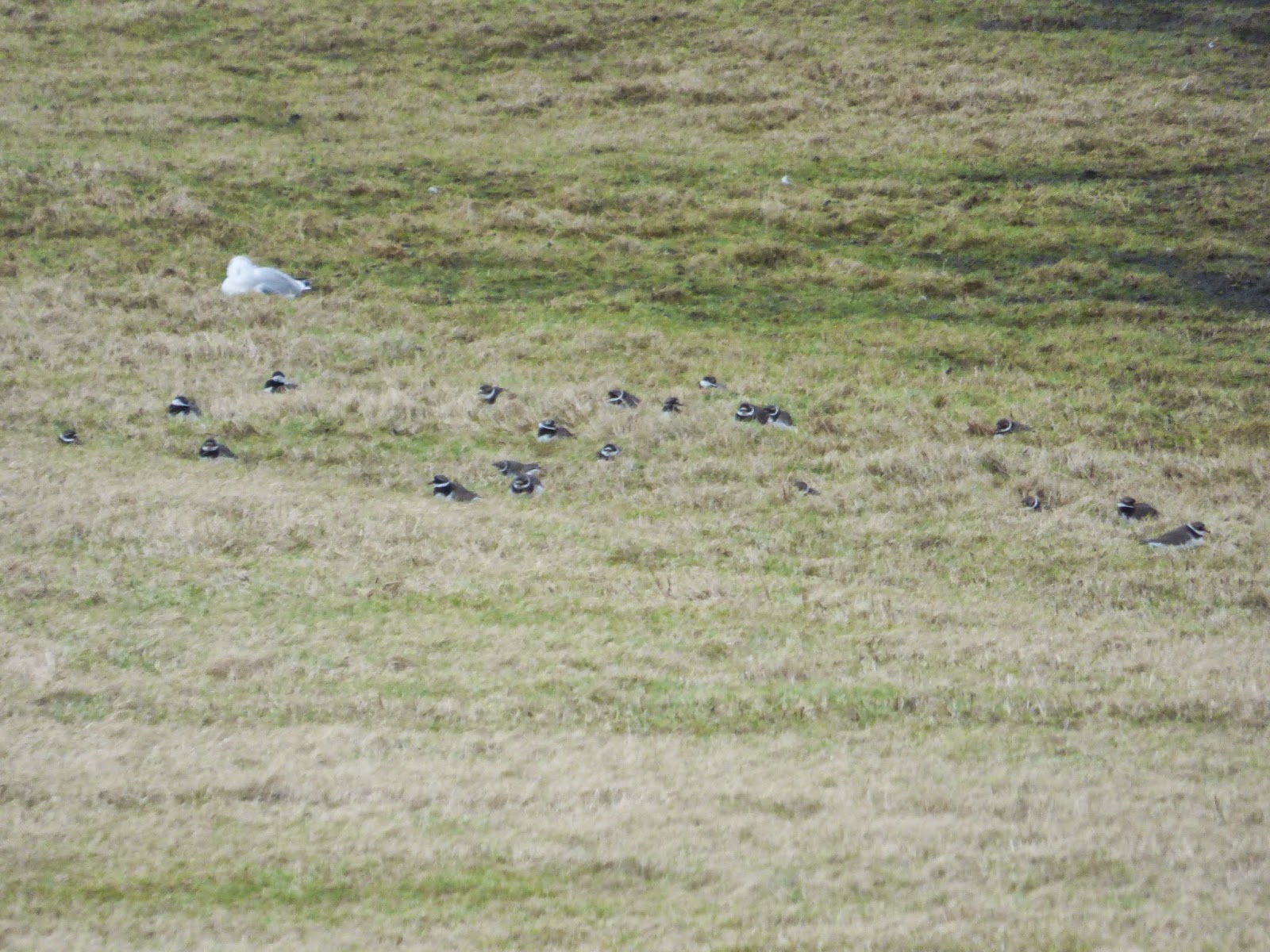 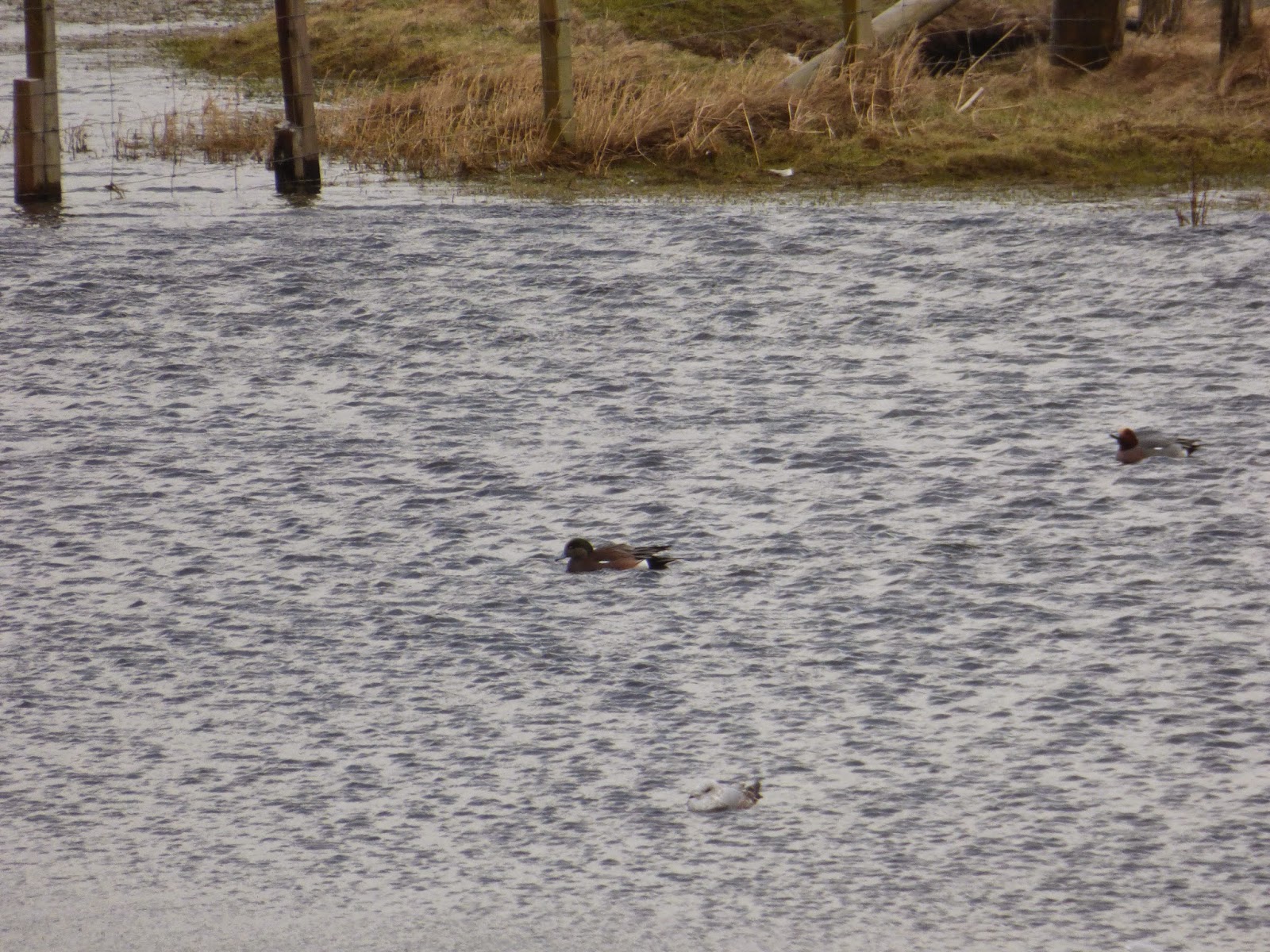 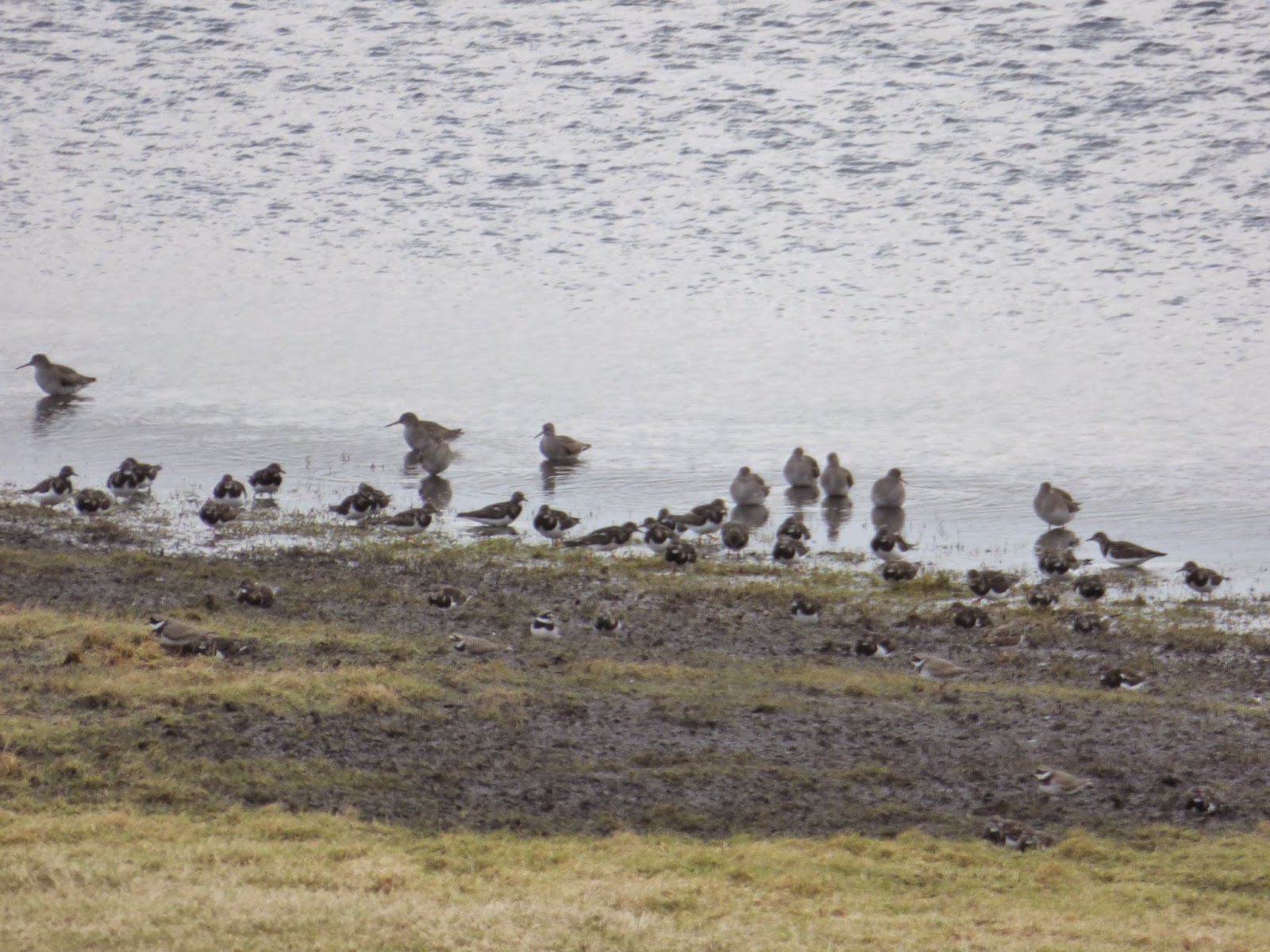 A couple of Waders 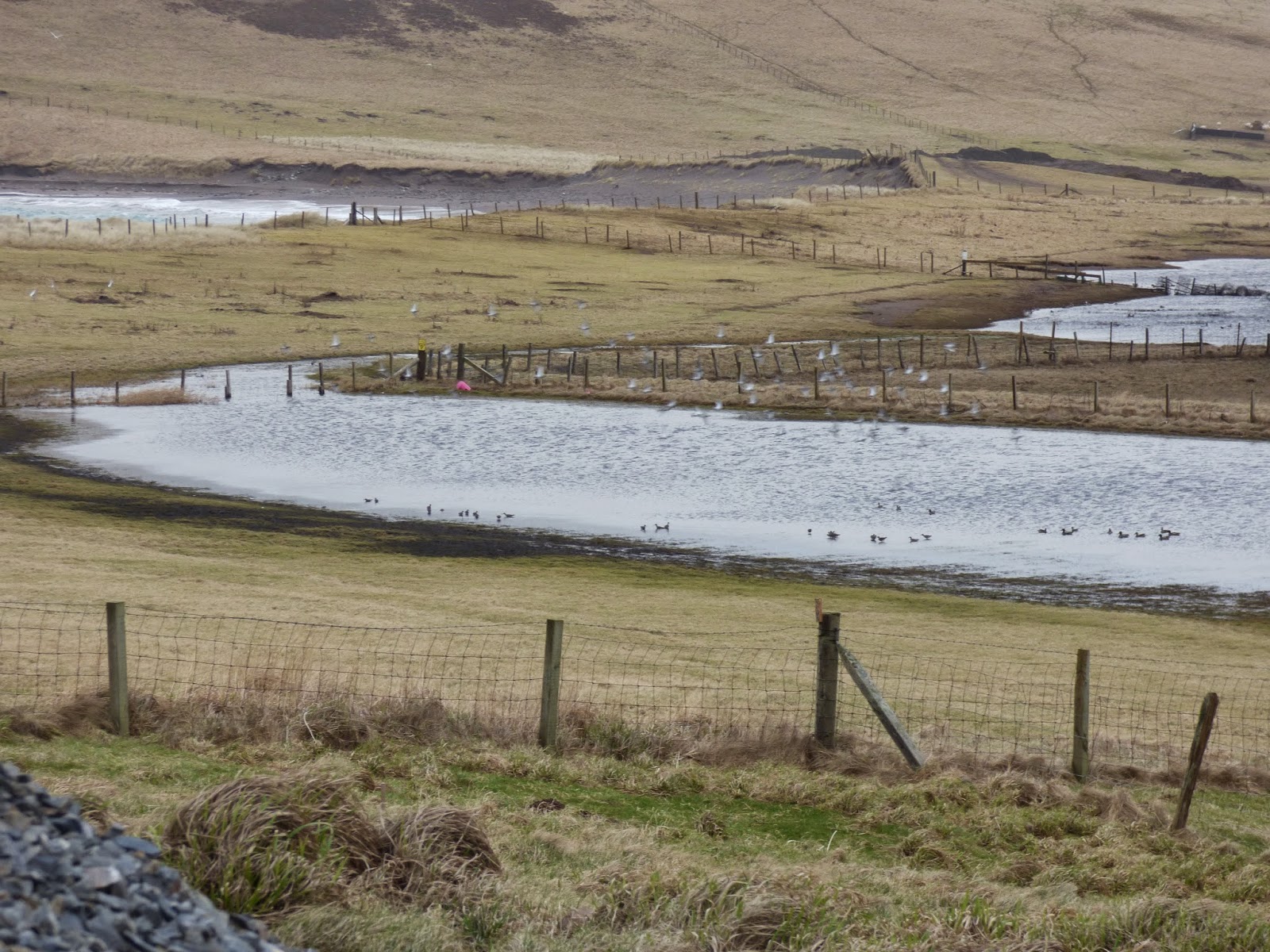 A finally stop was by the Melby beach, there was a Rock Pipit calling, a flock of Long-tailed Ducks and an Otter in the sea. 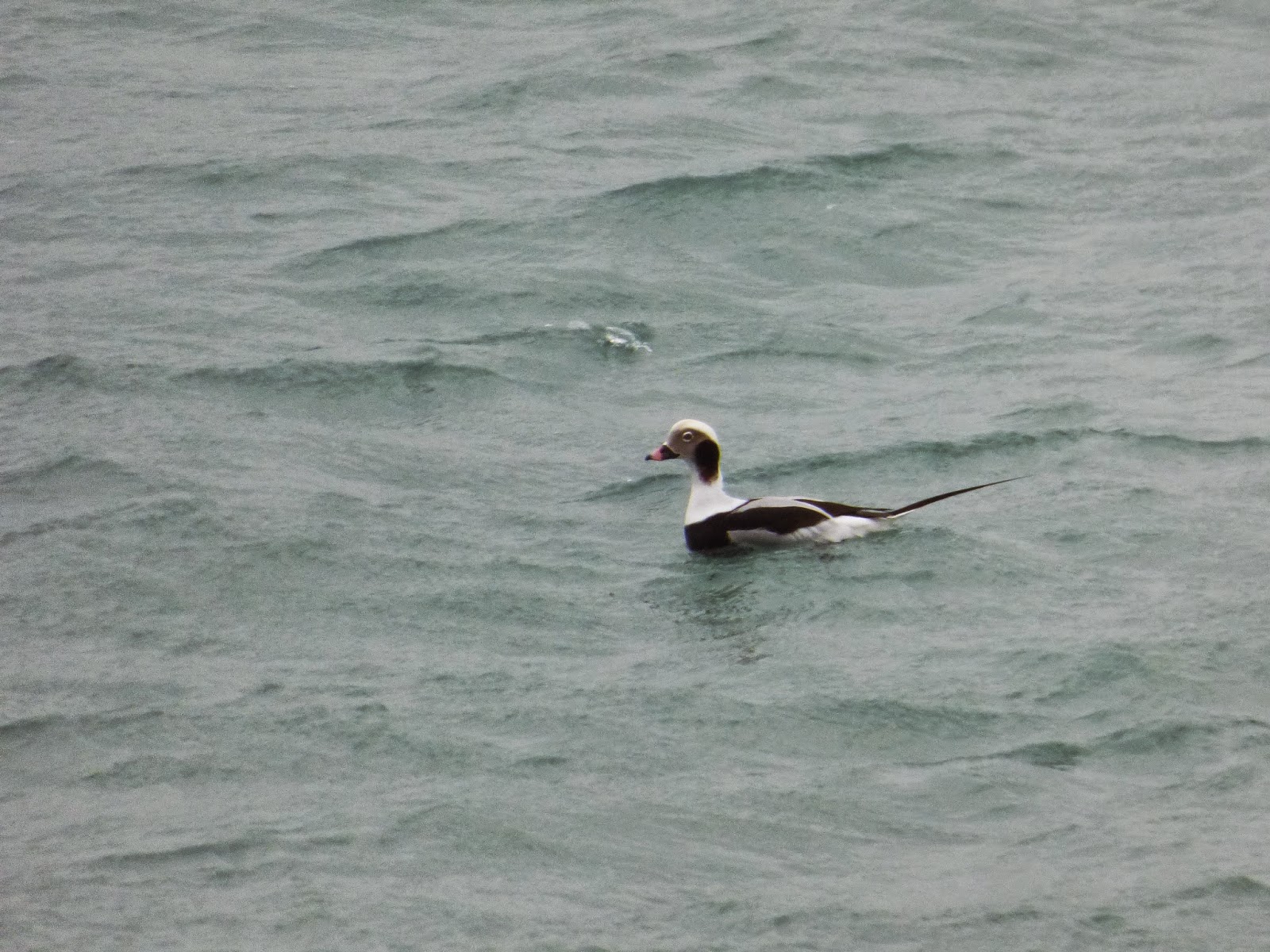 Male Long-tailed Duck, they are real beauties in their winter plumage

Our day pretty much ended at that but 2 Jackdaws and a Tundra Bean Goose were a treat at Gott farm, sadly as of the 1st of January Tundra Beans aren't rarities here no more!
Also as I was heading north I had 5 Jackdaws at the Sandy Loch outside Lerwick!

A good end to the weekend, and as some have called it a poor start to the year I'll call it a great one! I can't remember better birding from the first two months of the year!
Posted by Logan Johnson 1 comment:

Ticks, Rings and some Patchwork

This past weekend (the 31st/1st) was mainly spent round my patch of Clickimin/Helendale and Seafield in Lerwick.

I first started out at 11 after coming into Lerwick on the bus and I spent the next hour doing Clickimin.
It was ok for the time of year, but there wasn't much on the Loch and Helendale was a bit deserted but I headed out a second time just shortly after to Seafield but it was a bit deserted. 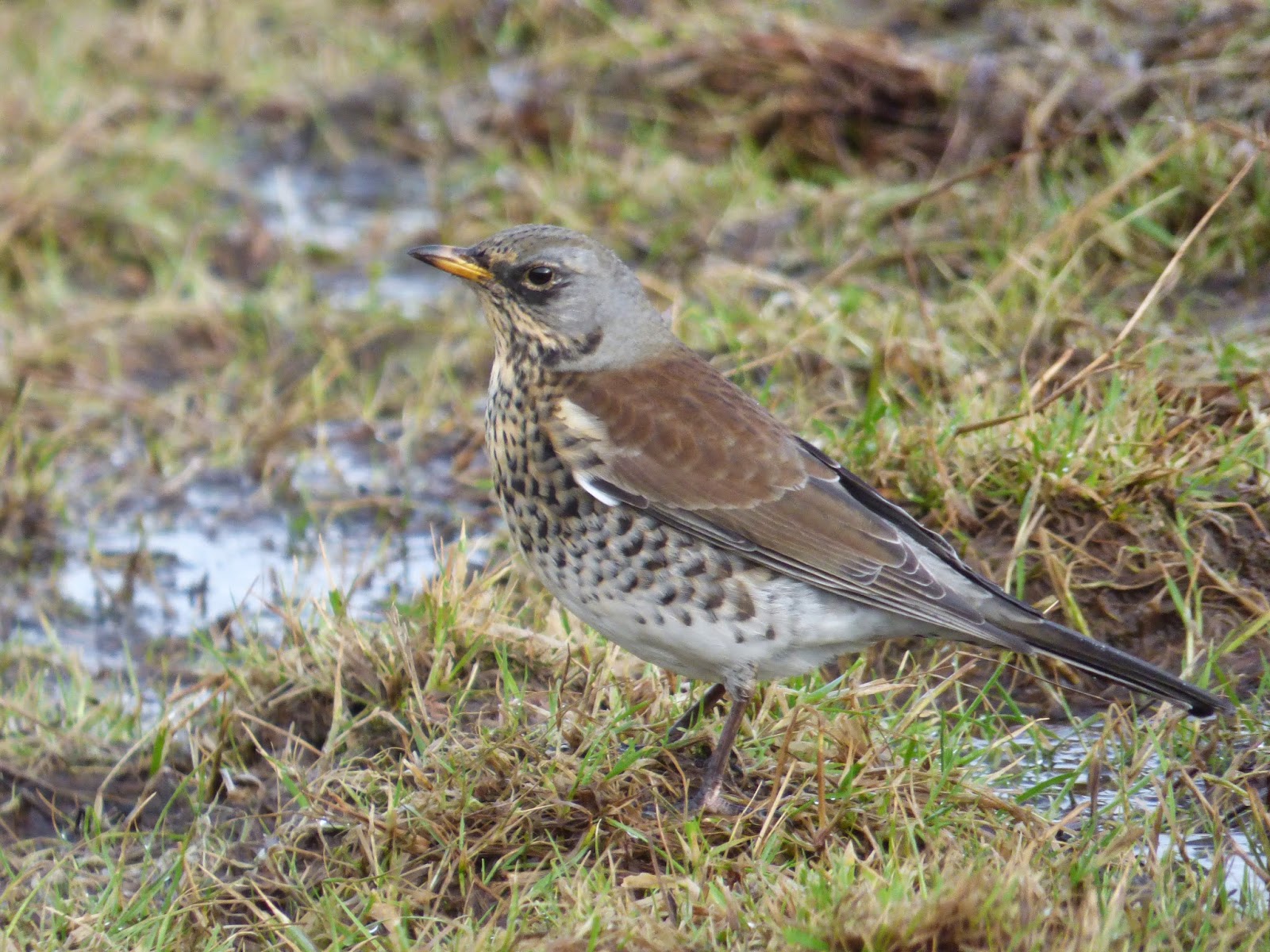 After denner I headed out again and I picked up quite a few bits and pieces, on the beach by Pullar's Loch, three Mute Swans (2 adults and 1 juvenile) were happily feeding along the shore.
Three Long-tailed Ducks were out in Breiwick and 16 Shalders (Oystercatchers) were among the rocks near the cafe.
Heading back over to Helendale I managed quite a few birds, I spent over 30 minutes waiting around, one male Chaffinch was calling, a Fulmar flew over (quite unsual), a Sparrowhawk flew back and forth three times overhead! (my first on the patch) and 2 Blue Tits and a Great Tit were enjoying nuts out of a feeder!
It wasn't a bad way to end the day, the light was going so I decided to end it at that.

Today was planned to go out and do some birding out "wast" at Sandness with Dave so beforehand I gave the patch a quick go (also hoping to get some pictures of the Blue Tits).
One of the first birds I had was a family of Whooper Swans, they were pretty close in to the shore so I went and tried to sneak some photos from them, though I noticed one of the parents were colour-ringed!
I'd already missed one colour-ringed bird on the Loch once so I wasn't going to miss this ones numbers!
I got closer and started snapping away at the ring which read "JB4".
I texted Dave the numbers and I was off again after a couple more shots. 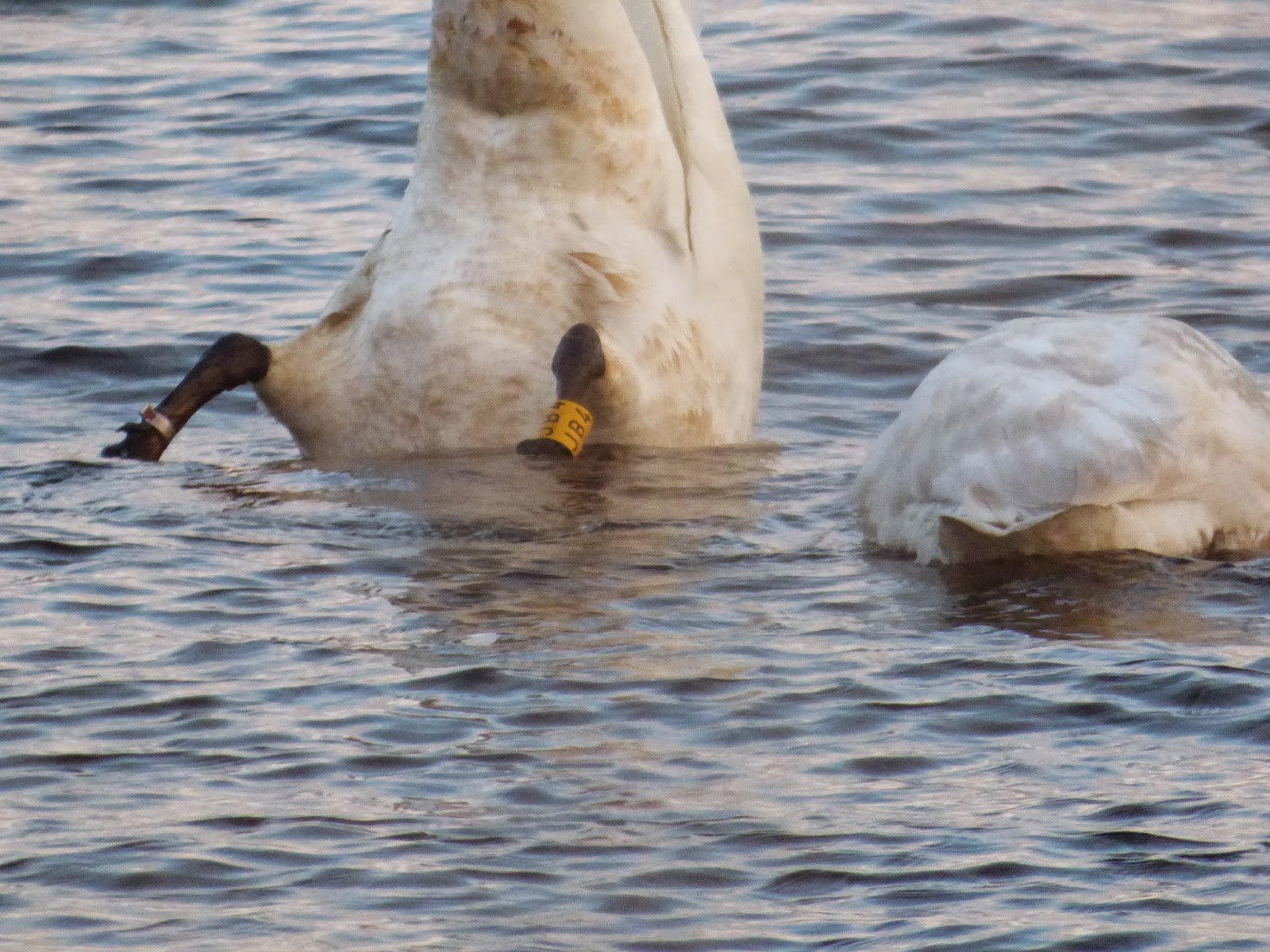 I got this info back two days later from Dave, "he" has quite a good history, being from Iceland and being seen in Shetland and Norfolk several times over the past 15 years but his favorite spot seems to be Clickimin. 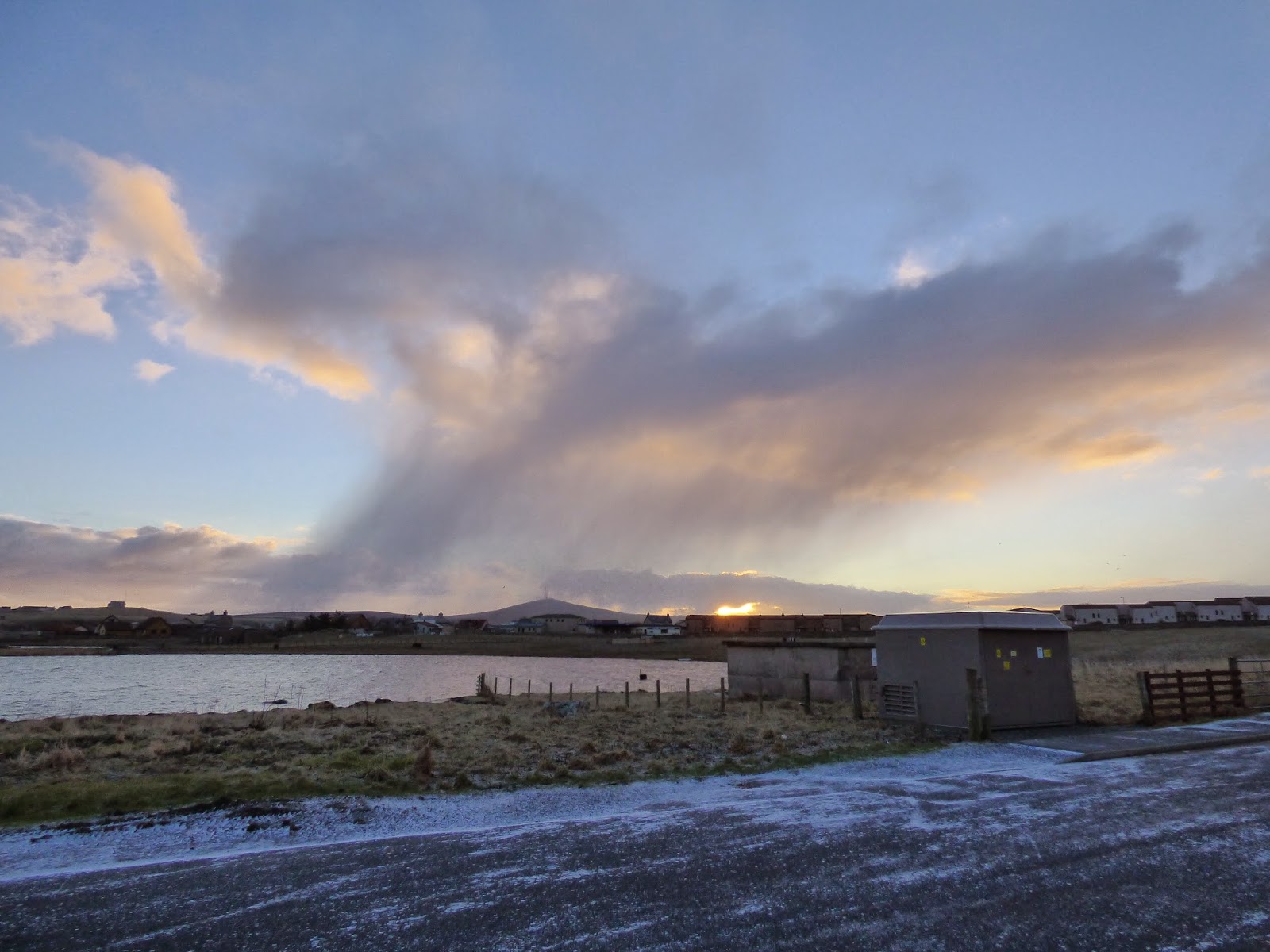 I headed into Helendale for the next while, hoping to get some photos of the Blue Tits on the nut feeders.
As I headed up the road this peerie dark crow was sat on the edge of a roof, with my eyes I could see it was light around the beak and I got my bins on a very nice adult Rook! a very fine addition to the patch list and also the same bird that might of been at Sound a few weeks back, Rooks aren't common at all in Lerwick or anywhere other than Kergord/Tingwall. 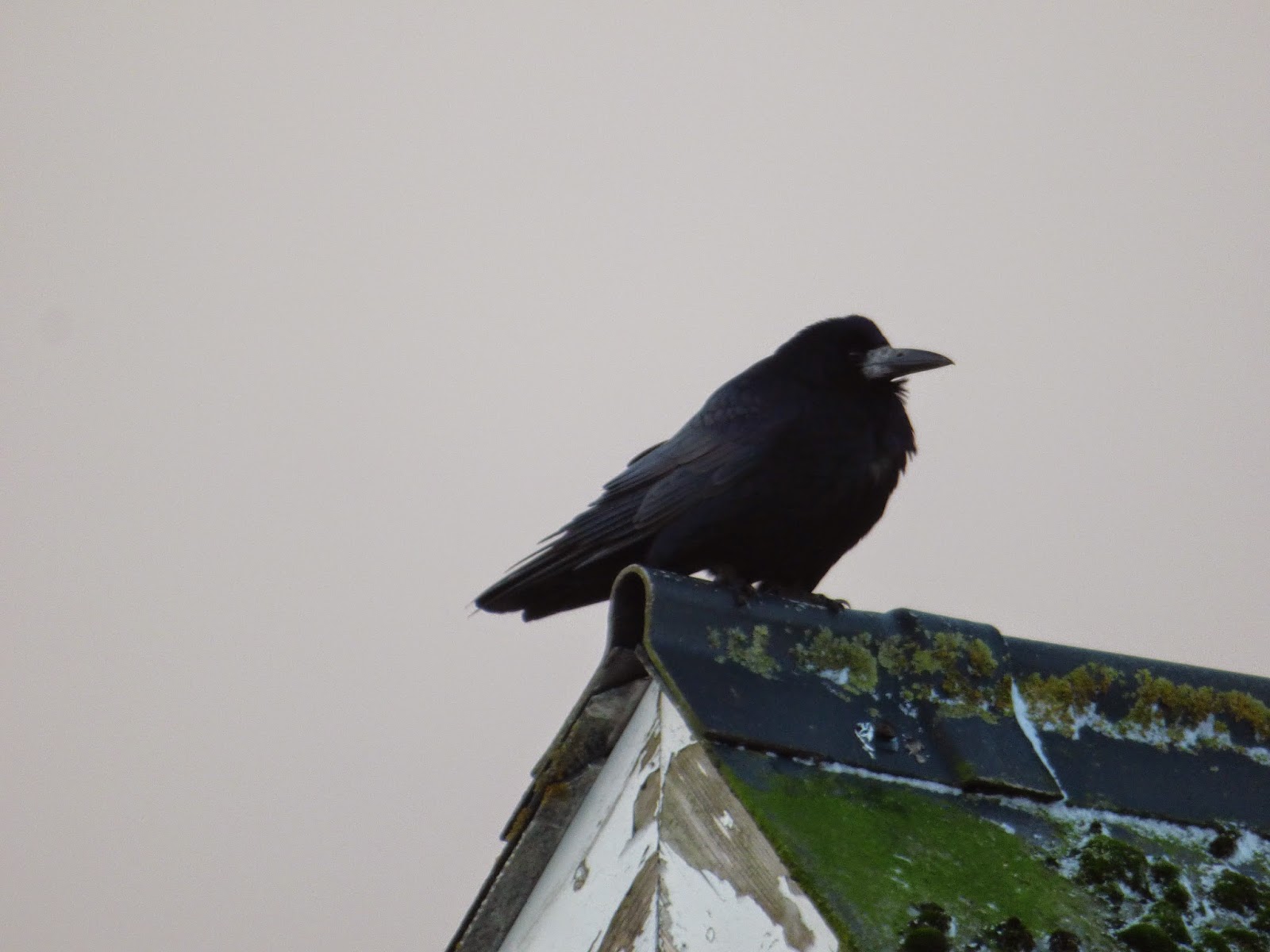 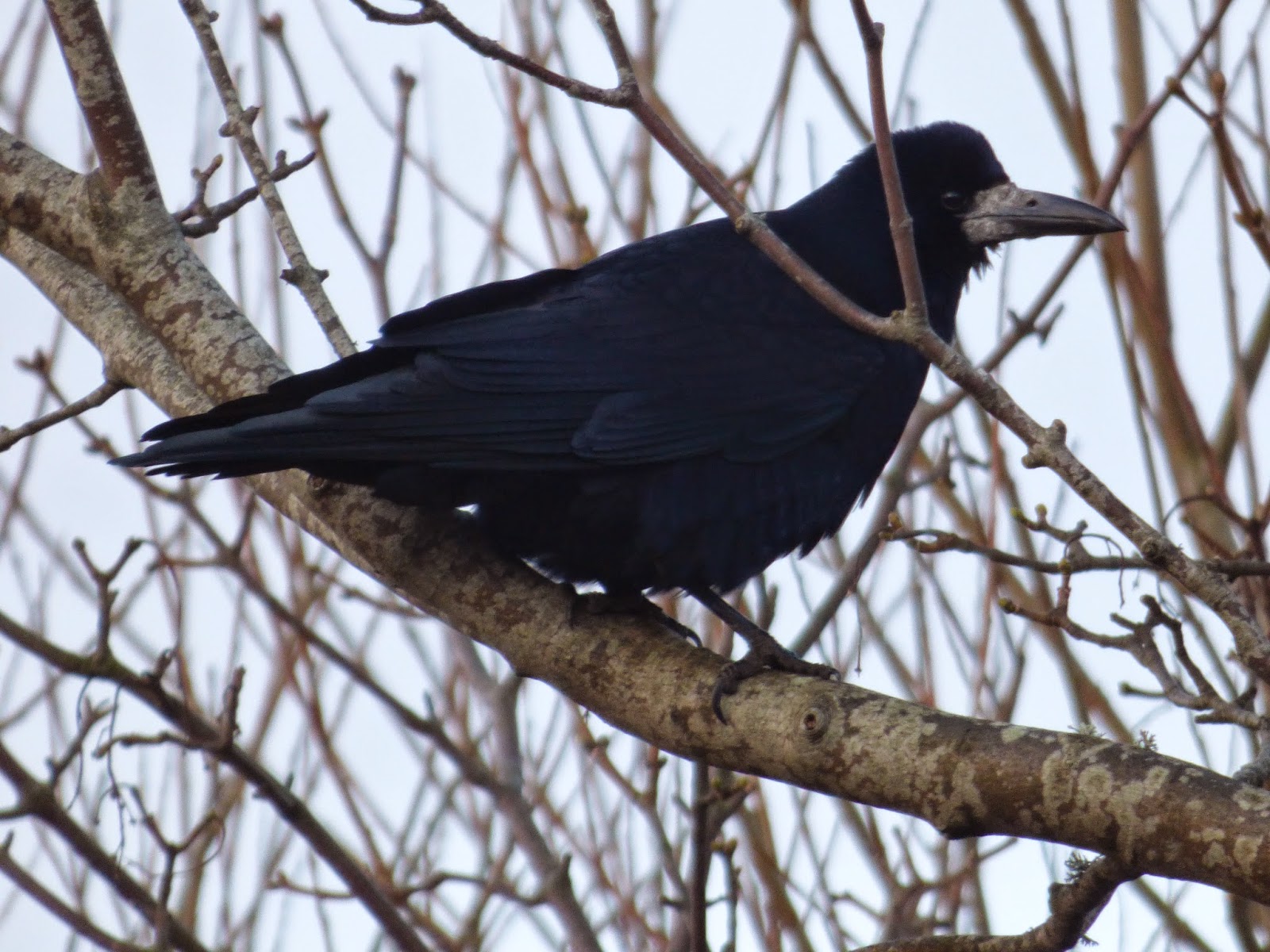 He even decided to sit in a tree for me

I walked up the road to where the feeders were and there was a Great and Blue Tit feeding with a few more around in bushes so I headed up for some photos.
30 minutes of waiting and photography produced nothing for Great Tits but the Blues were happy for photos. 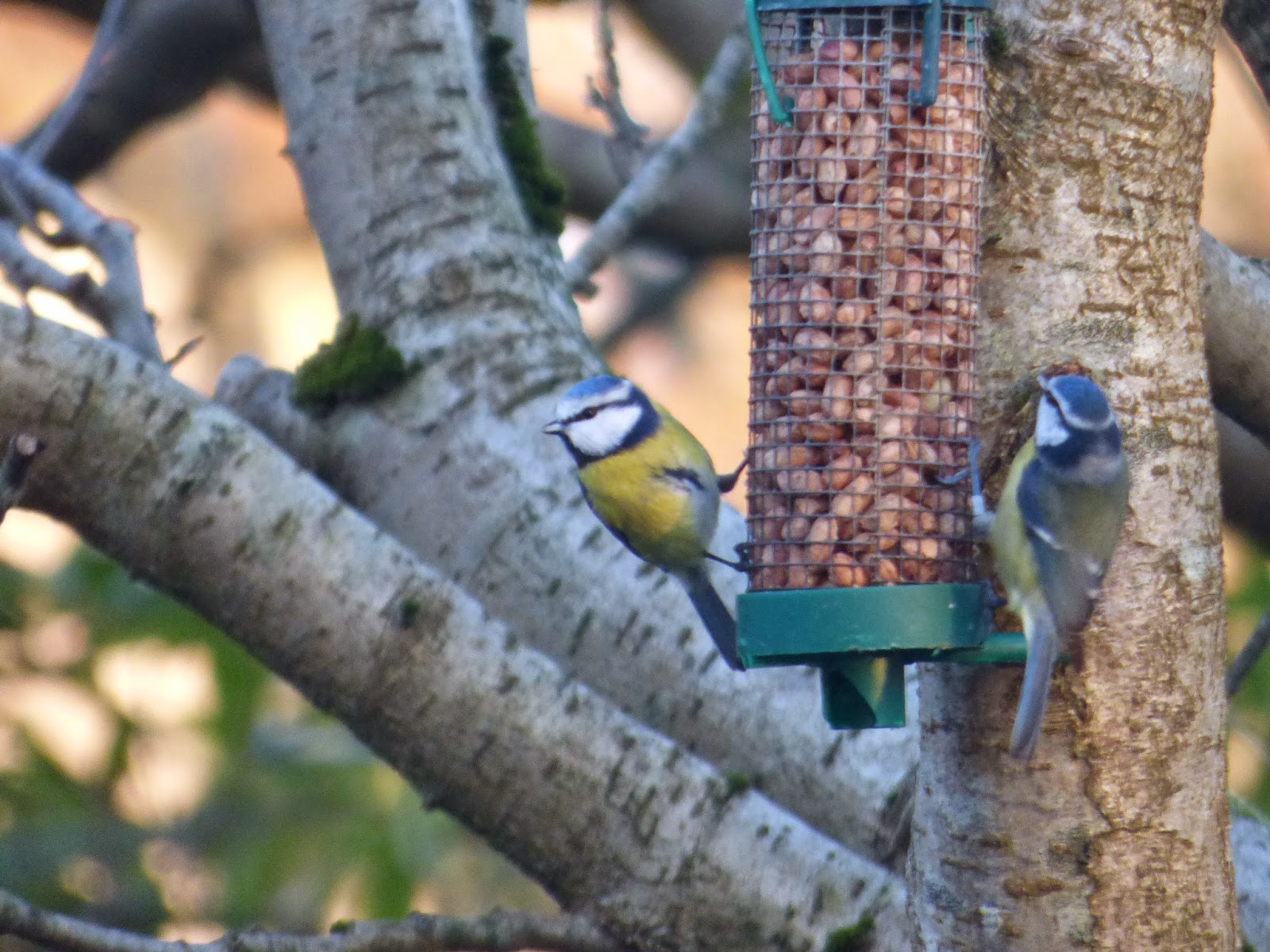 This bird on the right was even ringed! though I was told that it was probably a Lerwick ringer.

Soon the feeders were empty and I was needing to head off anyways so I left. 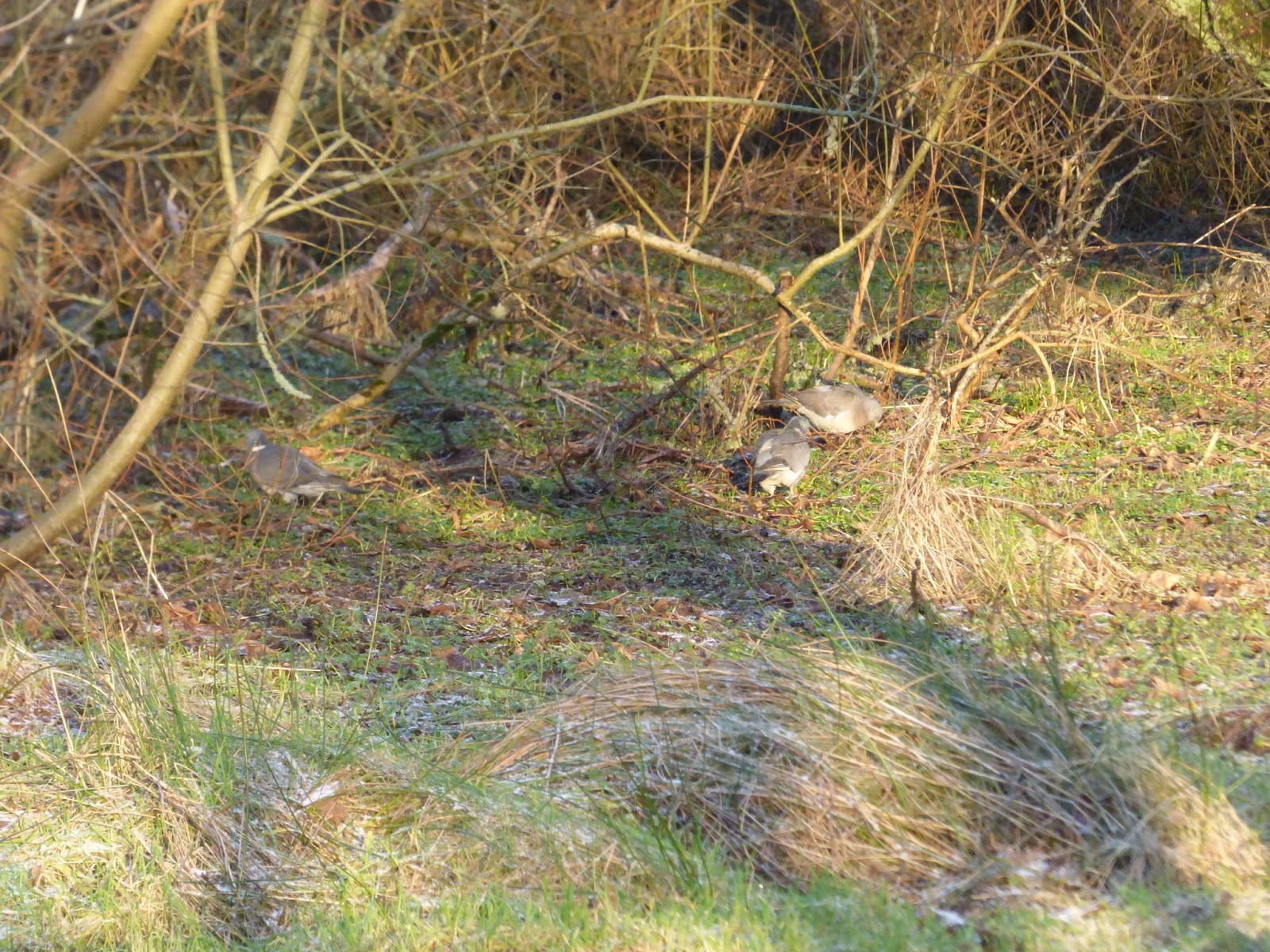 These three Woodpigeons were feeding among the Willows, I've spent weeks trying to find one as I saw one just before the New Year. 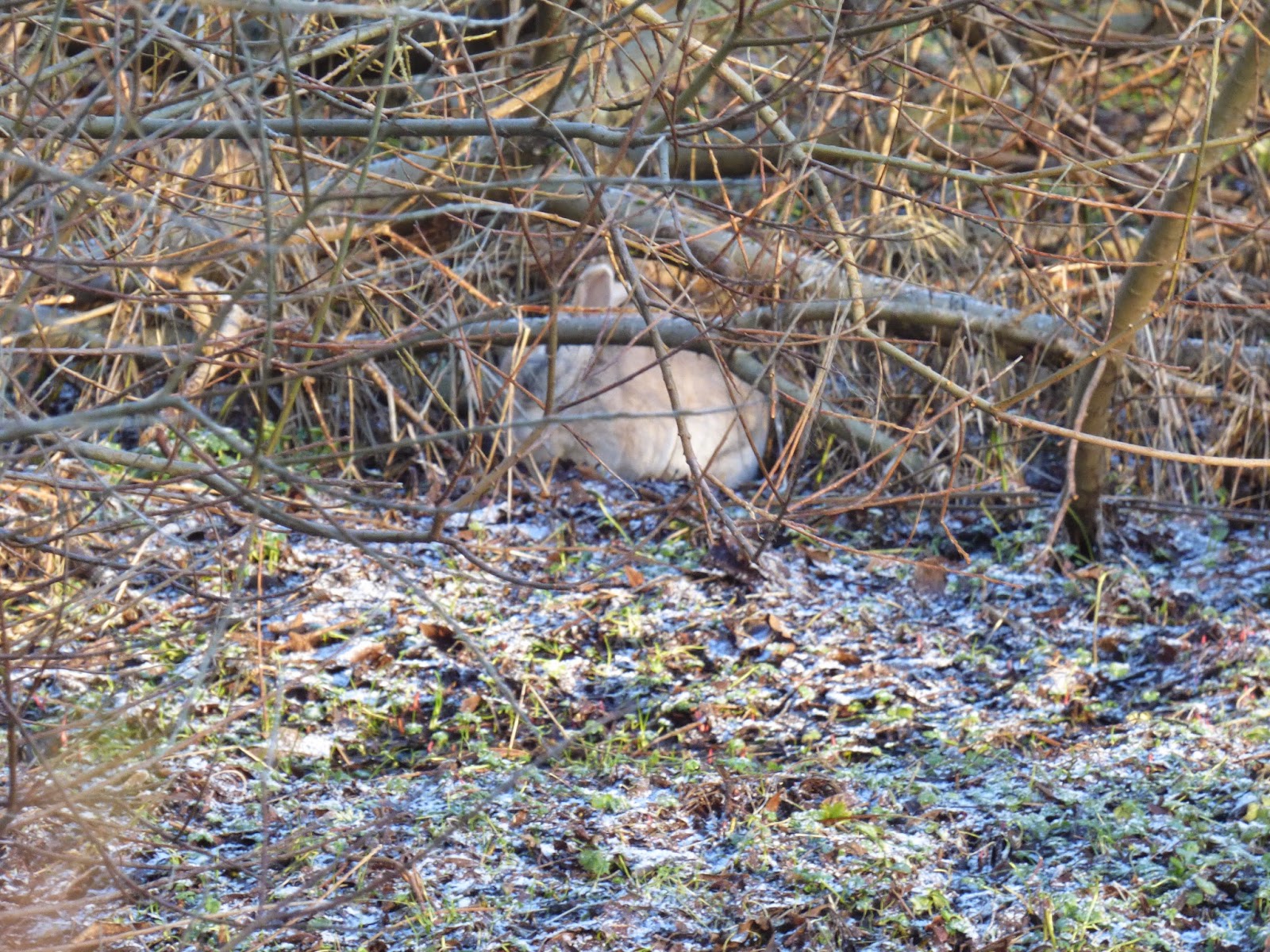 It also seems like this Rabbit was also among the Willows, why, I have no idea 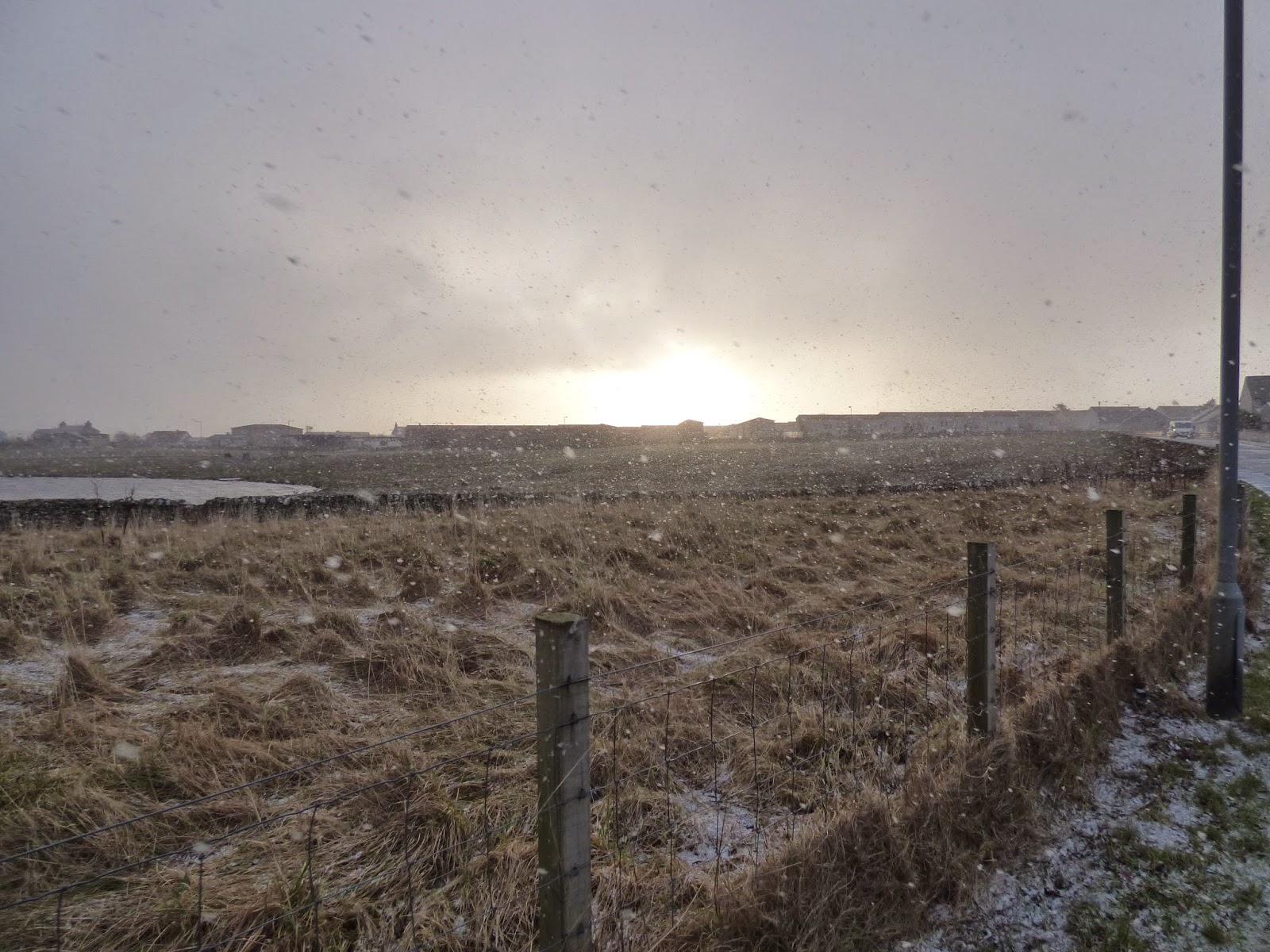 Around half an hour later, Dave pulled up and we headed off to Scalloway as going to Sandness in snow wasn't exactly a good idea.
There was a Mute Swan hanging around Scalloway so we decided to go and ring it, I still had half a loaf of bread from yesterday so it came in handy.
The Swan was easily caught and it was one pretty amazing experience to handle and ring one of this size!
But that was our day as the roads were too bad for birding so I went home afterwards.

So to end the weekend on I managed to Patch Ticks, the ringing of a Mute Swan and the sighting of a travelling Whooper Swan!