Well this is a bit of a blog post of a twitch that wasn't so last minute.

On Sunday (the 27th of April)  a Cretzschmar's Bunting (Britain's fifth) and a Caspian Stonechat (Britain's fifth of the subspecie) were found on Fair Isle (Thanks Deryk and David!!).
I had this crazy idea at the time to day-trip on Saturday and I actually put the plan into motion on Tuesday.
The day before I was able to borrow one of Paula's cameras to take in with me!
Four days later my granddad Tommy and I got on the 10:55 plane into the Isle!!

We arrived in Fair Isle at 11:20 just a bit earlier then what we were meant to! Tommy and Henry were ready to pick us up and we headed straight to Boini Mire by the Shop (the favoured place of the Bunting).
We met David (the Obs Warden) and he told us of a few birds about, we headed to Boini Mire and Tommy (the Fair Isle one), Henry and myself walked through the Mire while my granddad Tommy searched from the Shop.
We had no luck in Boini Mire but Tommy had a Waxwing at the shop!! I ran up and I saw it in the garden! year tick!
I got the camera on it and I got some pictures of it, it was an amazing bird as most Waxwings are! 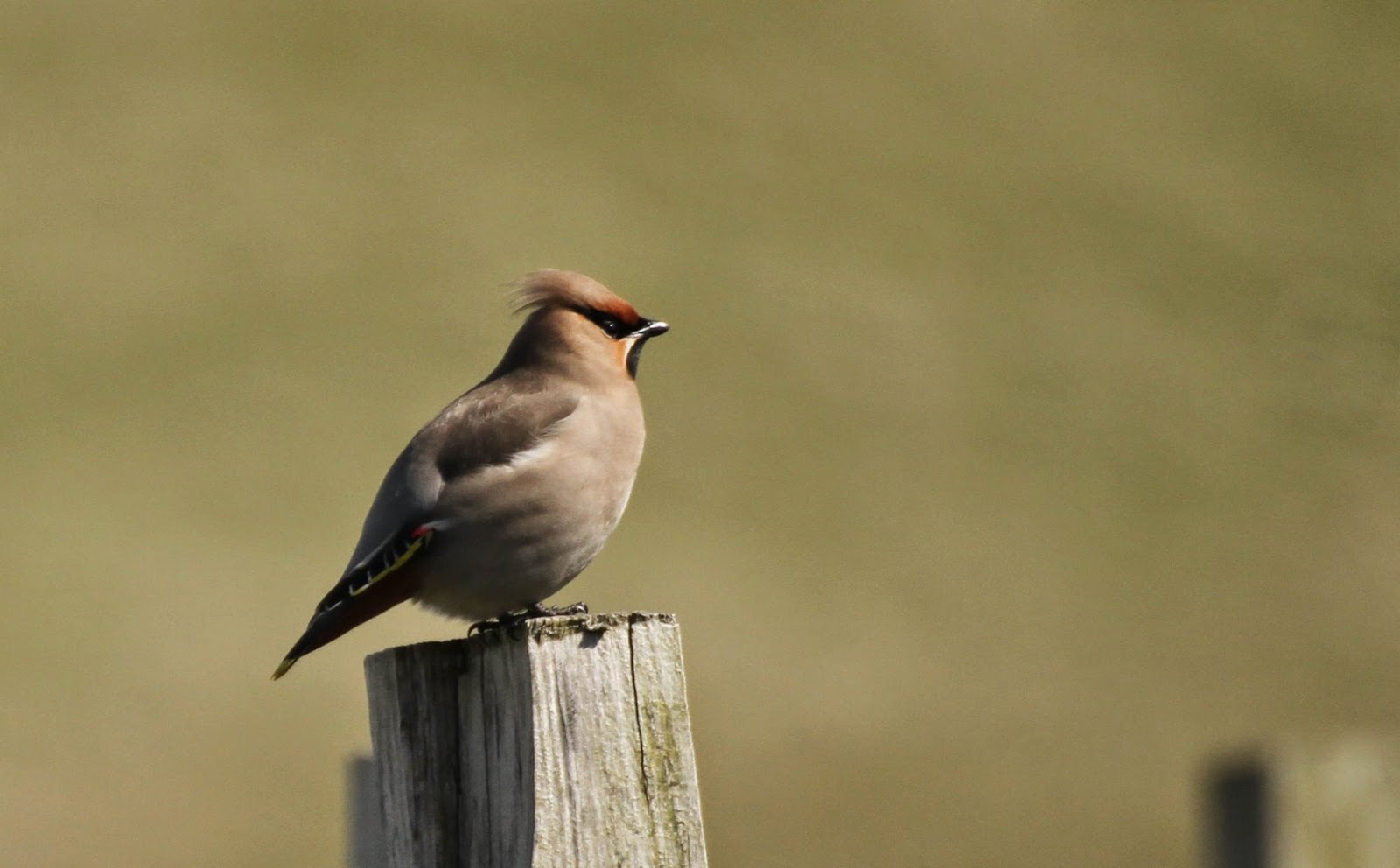 A beauty of a bird

Henry and I photographed the Waxwing for a few minutes before heading off to look for the Caspian Stonechat at Lower Leogh.
Henry and I got out first and we searched through the grasses between Upper and Lower Leogh, Henry spotted it within a minute of us being there and I got the camera out straight away! 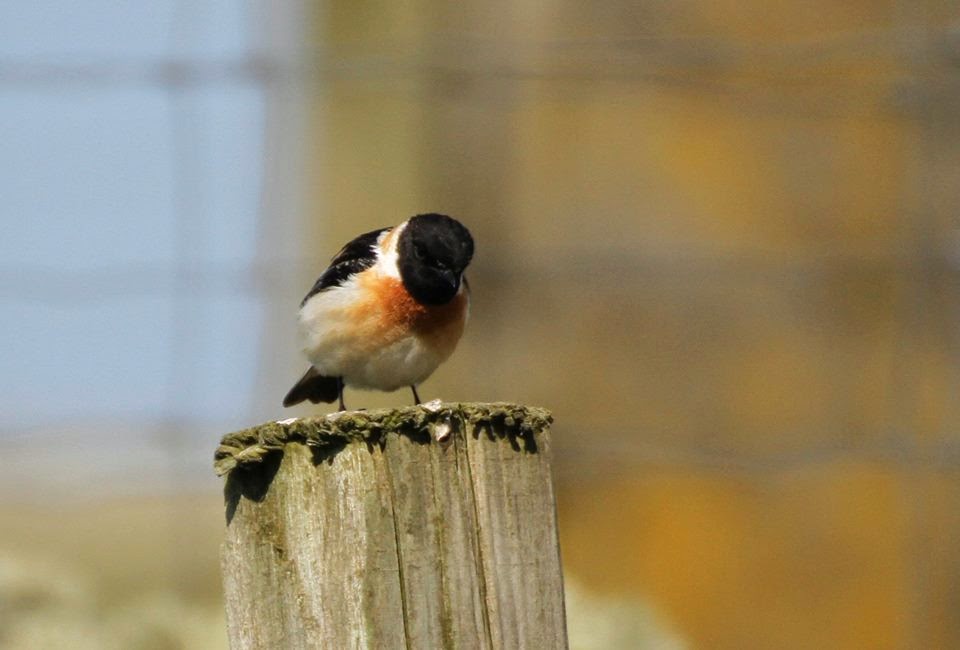 It was a beautiful bird and it is one of two kinds of Stonechat I've seen in Shetland, the Siberian Stonechat (specie) and the Caspian Stonechat sub-specie but I still haven't got Eurasian Stonechat!
We got some great shots and then it flew out of sight so we headed off to find a Subalpine Warbler at Burkle.
We arrived just to late, the Obs were already packing up to leave so I was told to view it from the road, we all waited a few minutes but a cat was around the bushes so there wasn't much hope of seeing it so we checked a nearby plantation.
There wasn't anything in it but when I turned back to look at Burkle I saw a Reed Bunting!
We headed north to Hoini afterwards to hunt for a Wood Warbler which David had told me about, it took us a few minutes to walk out there but it was a nice view.
I checked the section of cliff where I thought the Warbler was but all I found was a drenched Twite on a dry day, I then walked back and I joined Henry who was looking at a warbler.
It took a few minutes but Henry, Tommy and I decided that it was a Willow Warbler and I also saw a Puffin (two more year ticks!).
We headed south along the cliffs and we came across a thrush along a fence, the light made it look silhouetted, we had to go round it before anyone got an ID on it and it was a Redwing.
We headed towards the shop again but I headed towards Shirva to visit Nanny and Dad-dad, I had got about twenty odd metres away before Tommy was calling me back.
I made out that he was saying something about a Short-toed Lark but I couldn't see anything until three Larks flew up and they didn't come back.
One of the three were bigger than the rest but I can't remember if it was the middle one or the left, so no Short-toed Lark today!
I headed to Shirva and just before I headed in I saw the rusty tail of a Common Redstart! I followed it but it went out of sight! but I found something even better when I spotted a male Linnet on the dyke along by Shirva!! my first in Shetland!! I got some pics before it disappeared and I headed into Shirva. 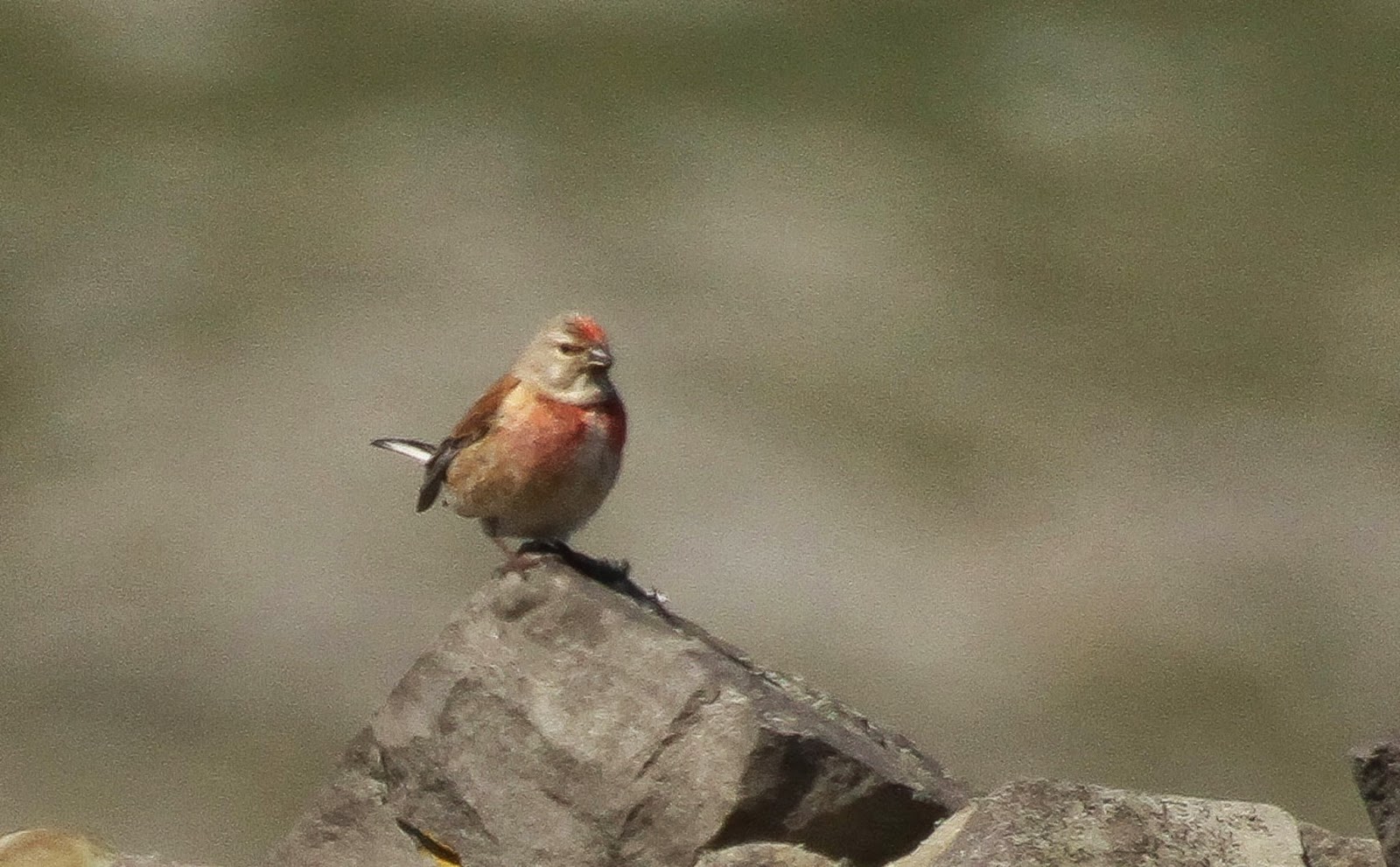 Not the best picture but you can tell it's a Linnet!

I went back to join Henry and the two Tommys, Henry and Tommy (my one) were at the shop while Henry's Tommy was hunting round Boini Mire.
I went to join them when I heard Henry shouting that they might of seen the CRETZSCHMAR'S BUNTING!!!
I ran as fast as I could with the camera and bins and I made it quite fast, the bird was seen behind the shop but sadly it was a false alarm.
Instead we got to watch a male Commom Redstart, a Dunnock, a Robin, one Lesser Whitethroat and a Willow Warbler! (not half bad) 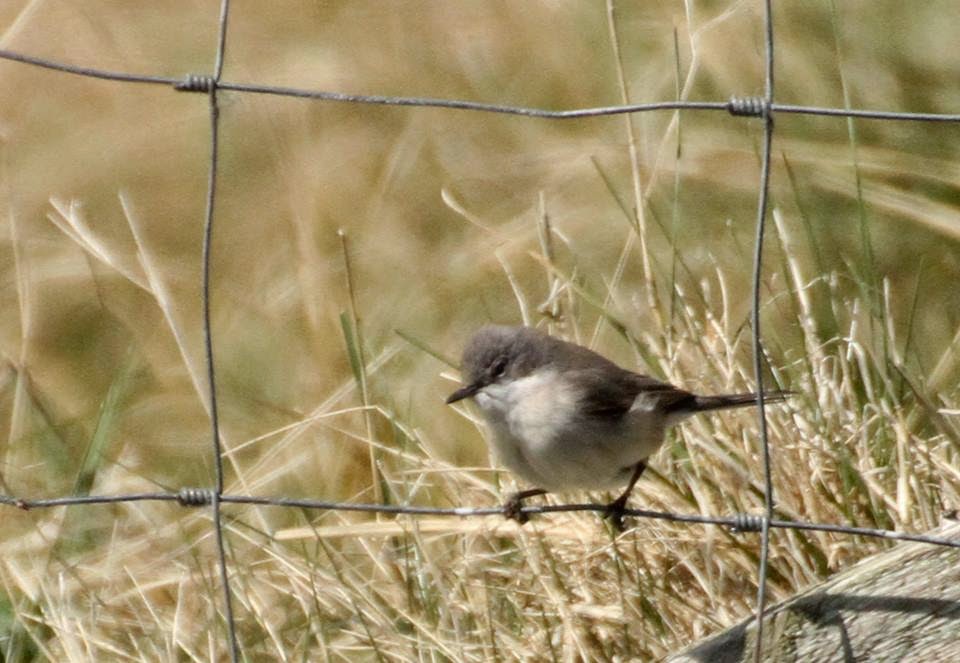 The Lesser Whitethroat spent its time to acrobatics on a fence 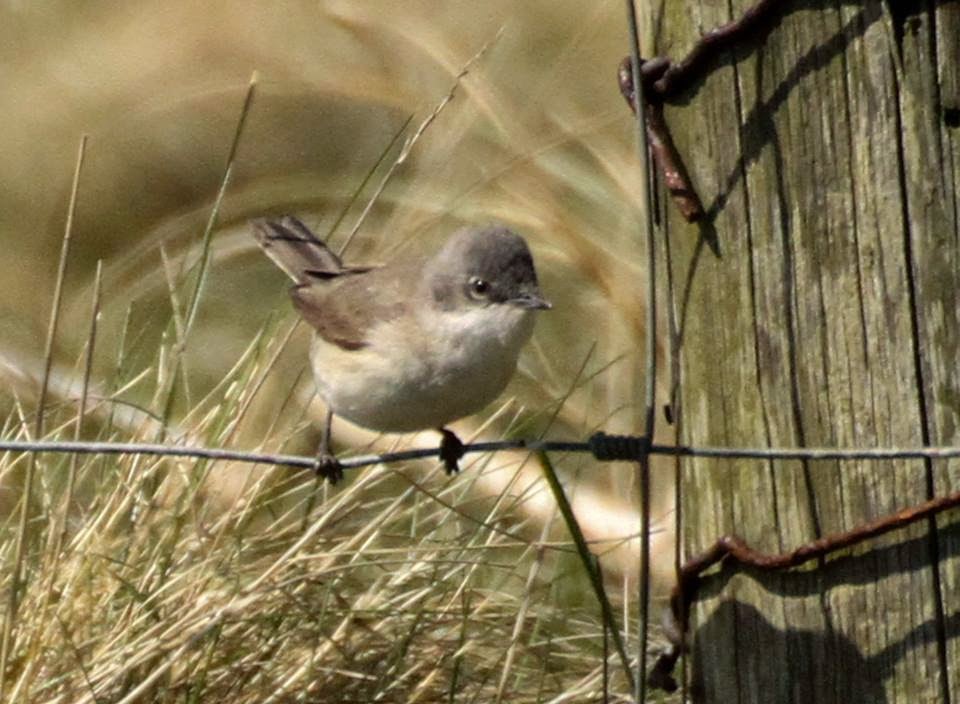 Quite a handsome peerie bird

We met Nick Riddiford of Schoolton who was out birding, we spoke for a few minutes before we searched Boini Mire again for the Bunting.
We searched the whole place and we still couldn't find it!!!! Henry and I then headed over to Midway while the two Tommys went back for the car.
When we got to Midway we couldn't find any birds but when Nick came round the corner he spotted two Linnets!
The car rolled up and we got in with only twenty minutes remaining! we rushed north and we jumped out at Upper Stoneybrek to hunt for a Wryneck! well the thing had disappeared (typical!).
Our next stop was the Chalet and a quick look there produced a White Wagtail and a Chiffchaff before I rush to the plantation for the final bird of the day!
We had a quick look at the plantation which brought a flock of sixteen Brambling before we headed to the airstrip at 14:00 hours. 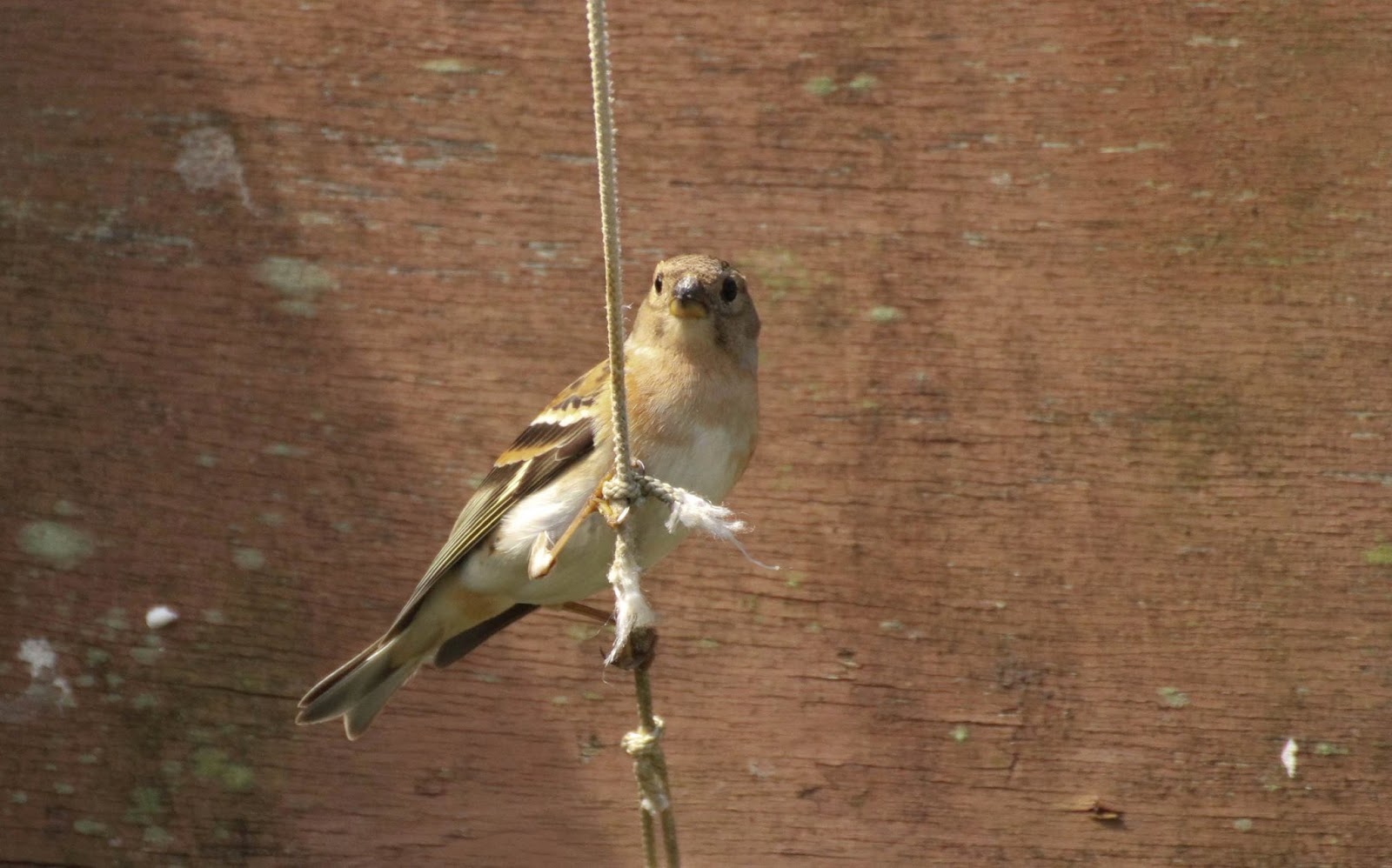 One of the sixteen Bramblings

We all said our final goodbyes before Tommy and I got on the plane.

I'm just going to add a few blog posts about the Cretzschmar's Bunting just so you can marvel at the amazing bird!


A big thanks to Tommy and Henry for the run around and another to David for sending me info on the birds roundabout!

I'm glad I went into Fair Isle even though I didn't see the Cretzschmar's Bunting!! but it was a beautiful day and there was plenty of birds about! and I managed to get ten year ticks! including a Shetland tick in the shape of a Linnet!
Posted by Logan Johnson